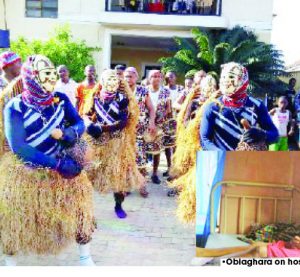 Mrs Oluebube Obiaghara, who is eight months pregnant, is currently receiving treatment at Adaugo Specialist Hospital, after being beaten by a masquerade as she was returning from Ugwuorie Market, Umuohama Ukpor, Nnewi South LGA, Anambra State, according to an exclusive report by Daily Sun.

Recounting her ordeal in the hands of the masquerade cult, Mrs Obiaghara said that she was returning from the market around 7:00p.m when the masquerade accosted her.

Her words: “There was this burial ceremony for late Mr Innocent Onyejinduaka, which was going on with lots of masquerades in attendance. His house is close to the market and I had to pass through that route to get to my home. I closed my shop around 6:00p.m and had to wait for extra one hour for the masquerades to disperse before going home.

“Unknown to me there was still one left. I did not notice the masquerade initially as it was getting dark but when I saw it, I ran and hid behind a man, an action that ordinarily should have made the masquerade to retreat but surprisingly, the masquerade left that man and started pursuing me with a big stick.

“I ran to a nearby house but the masquerade pursued me into that house. As I was about to get into the house, I fell down on my stomach and the masquerade came over me. The last thing I could recall was the heavy stick the masquerade had as it was descending on my big tummy before I fainted and later found myself on a hospital bed.”

The 29-year-old woman who had been in the hospital for five days, as at the time of filing this report, showed Sunday Sun the injuries inflicted on her as a result of the beating. Amid sobs, she said that she had not been able to move her left leg because of the pains and injuries she sustained, adding that all her belongings got missing while the foodstuff she bought in the market was destroyed in the process.

She wondered why the town could not curtail the activities of the masquerade cult that particularly targets women and young girls . “I thought masquerades do not stroll in the night but the reverse is the case here in Ukpor. Few years ago, a pregnant woman fell off from a commercial motorcycle as she was running away from a masquerade that was pursuing her,” she recalled.

Mrs Obiaghara who is married to an Ukpor man, Mr Ekene Obiaghara, however, thanked God for saving her life and that of her baby even as she prayed for safe delivery.

A community source who pleaded anonymity said the way the Mmanwu Ozoebunne (as the masquerade is popularly known in the area) beats, harasses and maims people is uncalled for.

He alleged that a man who is not from Ukpor was once taken by force to be initiated into the cult but when he resisted, he was dealt with.

The priest called on the government to take urgent steps to curtail the activities of the cult, which according to him is becoming a menace to the society.

He urged the government to safeguard lives and property of the people.

However, when contacted for comments, some stakeholders of Ukpor community dismissed the reported masquerade attack, describing the claims as the handiwork of those who want to discredit the people’s culture.

Traditional ruler of the community, Igwe Dr Francis Onyimadu, doubted the credibility of Mrs Obiaghara’s claims, noting that no such incident was reported to his palace.

“I’m the chief custodian of the community’s culture and nobody reported any form of infraction by any masquerade to me. I’m aware of the burial of the deceased Innocent Onyejinduaka but I didn’t hear of this matter. Mmanwu Ozoebunne is a general name we give to that class of masquerades and it is not peculiar to Ukpor community.

"Other communities in our area like Ihiala and Okija also have masquerades. We have rules and regulations that guide the activities of masquerades in our community and we don’t hesitate to sanction any defaulter.

“We even have a taskforce which monitors such activities but I think I can guess where this is coming from. Some so-called Christians who have ulterior motives have been saying a lot of things to disparage our culture and customs in order to stop the masquerades from operating but I know they can’t succeed,” the Igwe said.
Posted by Unknown
Labels: Gist, News