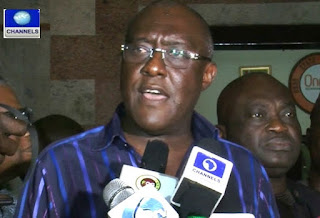 Metuh, who is standing trial for allegedly diverting N400 million from the former National Security Adviser, made this denial on Sunday, during an interview on Channels Television Programme, Politics Today.

He said during the interview that he has never been to the office of the NSA and has no relationship with him.

Metuh, during the interview, pointed accusing fingers at the Federal Government. He claimed that the APC-led government is witch-hunting its opponents especially members of the PDP and not truly fighting corruption.

“How can you call someone a looter when he is still in court. How can you say someone stole when there is no evidence about it? When you are saying that the money paid into his account is an unlawful activity. You haven’t proven it. You have not established anything. Maybe because you think you can manipulate the judiciary,” he said.

“Is PDP an individual, if there are PDP members that have looted, please charge them to court, even if they have gone to the APC. Do not say the PDP has looted because the PDP is not an individual.

“PDP as a party ensures the principles of democracy. We allowed people their fundamental human right,” he said.

The Federal Government in its list of alleged looters released on Friday named Metuh as one of those who have allegedly looted the nation’s treasury. In reaction to this, Metuh said the APC-led Federal Government has resorted to all kinds of tactics to dehumanise and intimidate him.

Metuh, in his ongoing trial for allegedly diverting N400 million from the former NSA has filed an application seeking to travel to London, United Kingdom to get treatment for a malignant spinal cord disease.

The Supreme court which is sitting in Abuja, however, adjourned ruling on Metuh’s application for permission to travel to April 19, 2018.
Posted by Unknown
Labels: News, Politics