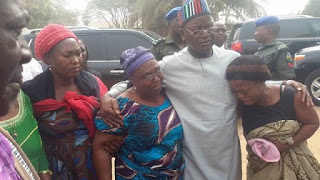 Benue State Governor, Samuel Ortom, on Tuesday told the Internally Displaced Persons, IDPs, to go home and use stones to defend themselves.

Ortom explained that he was tired of keeping IDPs in camps over the uncontrollable killings in the state.

The governor said this during his visit to the displaced persons after armed herdsmen attacked Naka, Gwer West Local Government Area of Benue State.

This was after the Chairman, Gwer West Local Government Council of Chiefs, Chief Daniel Abomtse said that
24 persons were killed on Thursday’s attack on Mbapa, Mbapupuu, Mbachohon, and Enger, all in Agagbe District in Gwer-West LGA.

He said, “David in the Bible used ordinary stone to defeat his enemy, it is now time for you to stay at home and use the stone in your homes to defend yourself instead of running away.

“I believe in the rule of law, equity and fairness, but I cannot continue to keep IDPs and l can’t afford to have another IDPs in Gwer West. This must stop. We must stop truncating the future of our younger generation.

“When we allow laws to be violated and nobody takes action, it then allows for impunity and when you give room to impunity, it will result to anarchy which will in turn breed a lawless society.

“Therefore, we the citizens must rise up to support the security agencies by way of providing lawful and necessary logistics such as information, equipment and financial support to back up their operations.

“Just yesterday (Monday), a soldier was killed in Guma, security agents are not spared. Security challenges are enormous.

The gruesome murder of 24 people by Fulani herdsmen is quite condemnable.
“Time has come if you are willing to live in Benue State, you must be ready and willing to be law abiding.”

The governor added that the state government was working with traditional rulers and other necessary organs of government to strengthen the vigilante team so as to give it full legal backing that would enable the group assist the security personnel in curbing criminal activities in the state.
Posted by Unknown
Labels: News