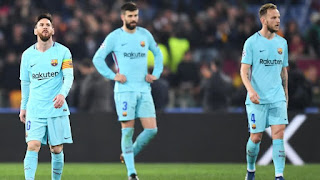 Former Real Madrid striker Michael Owen has claimed that Lionel Messi and Luis Suarez are responsible for Barcelona’s defeat to Roma in their Champions League clash on Tuesday.

Owen hit out at the South American pair after Barcelona were knocked out of the Champions League by Roma on Tuesday night.

“It is incredible. When we look at the stats and everything that it tells us it is incredible, but your eyes don't lie,” BT Sport
“We looked at the game in the first leg.

We've watched Barcelona for a number of months now and I'm not sure — even though they haven't conceded many — I'm not sure you cannot concede when you've got two strikers that don't put anything into defending.

“They are basically defending with eight outfield players against eleven and I'm not sure you can do that at the highest level.

“You could argue that Roma aren't at the highest level. There are teams that will exploit that even more. But no more, because Barca are out.”
Posted by Unknown
Labels: Sports