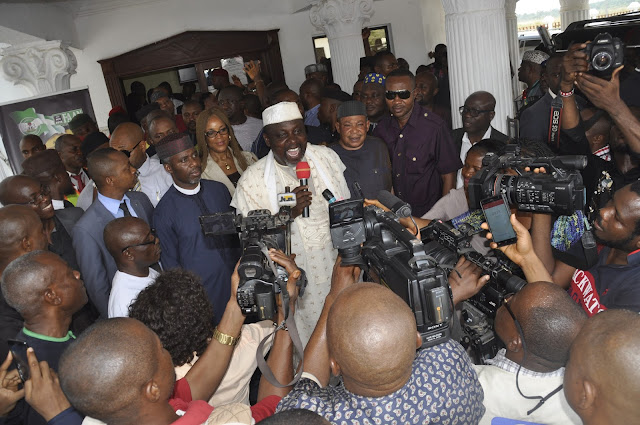 He also said that he Contested and won the governorship election of 2011 and that 2015 not on the basis of zoning or support of godfathers but on the premise of what Imo people believed he could do with the position.

On Uche Nwosu, the governor said his endorsement is a step in the right direction, and assured that he will never disappoint Imo people and that he will do well as governor.

Governor Okorocha spoke weekend when the leaders of Ideato South Local Government came to Government House Owerri in their large number to assure him that they would follow any Political direction he takes in 2019, Stating that the governor is the pivot on which their own Political interest rotates.

According to the governor, when he came in 2011 and decided to run for the guber on the platform of APGA there was nothing on ground and the State Chairman of the Party was more than 75 years, an indication that people were not keen in the Party.

He Continued, “In 2011 Chief Emmanuel Iwuanyanwu, Chief Arthur Nzeribe, Dr. Mrs. Kema Chikwe, Chief Hope Uzodinma, Chief Achike Udenwa, Emeka Ihedioha, Chief Ikedi Ohakim, Senator Ifeanyi Araraume were either in PDP or ACN. None of them was in APGA, but I confronted them and God gave us Victory over them and we defeated an incumbent”.

He further Stated “the Political battle in 2011 and 2015 was all mine and my God, and the poor masses of Imo State. Yet, God gave us Victory over them. When I visited late Chief  Odimegwu Ojukwu, I expected that he would come and raise my hand as the Candidate of the Party, but he could not do so because he fell sick before the time. Only God raised my hand and we won”.

He Continued “When I also told my people, about my intention to vie for the Seat of governor, most of them were saying that it was not the turn of Orlu Zone. But I told them that my case was different. And since I became governor, I have never segregated against Owerri, Orlu or Okigwe zone. Infact, I have worked in Owerri much more than any of my Predecessors had done and no Owerri indigene has done what I have done in Owerri”.

His words, “don’t also forget that in 2015, all influential Politicians in the State increased in number and they were all in PDP. They were backed with federal might, with all the security agencies and INEC working for them. Yet, here we are today,

“In 2019 it will be easier. We are more now. Your unity as it is now shows that we are ready for the 2019 elections. My advice is that you must strive to remain united because any crack can allow enemies or detractors into the fold. I assure you that Victory will surely be ours as long as we are standing on God’s side,

“Zoning to them, is that Political manipulative tendency which allows the opportunist cabal to remain in Power at the detriment of the ordinary masses. So, let no one deceive you. Please remain focused and united on this course”, he Stated.

Some of the leaders of the Local Government including Hon. Ikechukwu Amuka of the State House of Assembly and Dr. Pascal Obi, Principal Secretary to the governor who spoke, told the governor that they are on the same page with him as far as the 2019 election is concerned.