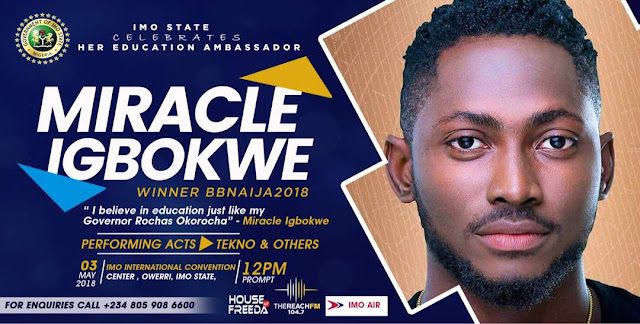 The IMO International Convention Centre-IICC will be ignited with glitz and glamour on Thursday May 3,2018 as Imolites of goodwill,fans and entertainers roll out drums to celebrate their "Education  Ambassador" and Star prize winner of the  just concluded reality TV  edutainment show, Mazi Miracle Igbokwe of Big Brother Naija reality TV show.

The event powered by REACH 104.7 FM, official carrier of the celebrant and crew-IMO AIR with support from HOUSE OF FREEDA shall parade on stage, Imo state based artistes with Nigeria's sensational hip hip crooner, TEKNO.

According to Hon Chukwunonye Irouno, Special Assistant on Entertainment to Governor Rochas Okorocha, a street Carnival-like motorcade will convey Mr Igbokwe round Owerri Metropolis before the big party @2pm.

Recall, "Miracle" came tops at the just concluded epochal TV show and was credited as most behaved contestant.He was popular with the promotion of Governor Rochas Okorocha's continuing Free Education Policy in Imo and was patriotic about confessing it publicly during a heated debate session and was quoted  "...i believe in education just like my Governor Rochas Okorocha.." (Watch video below).This,the sponsors consider a display of the true "Imo Spirit", hence, the honor on him as "IMO Education Ambassador".