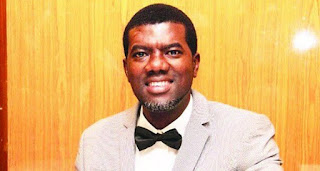 Reno Omokri, a former aide to Goodluck Jonathan has reacted following reports that President Muhammadu Buhari has indicated interest to run for a second term.

According to Reno, Buhari's second term chances of re-election is as tall as Elrufai.

He took to Twitter and wrote: "It is a good thing that it was @Elrufai who announced President @MBuhari's second term because his chances of re-election is as tall as Elrufai. A man whose supporters can't declare one thing he has initiated and completed has declared us all fools by this 2nd term declaration.

Since Buhari hasn’t initiated and completed even one project as #BuhariChallenge proves, I urge him to use 2019 election to redeem himself. Initiate and complete a free election and give Nigerians the opportunity to fulfill their desire to retire you from politics next February!

The man knew that his 2nd term declaration is unpopular, unpleasant and unpalatable to the vast majority of Nigerians which is why he ran away to London as soon as he announced the news.

One would have thought he is contesting for @Theresa_May’s job the way he dashes to the UK." 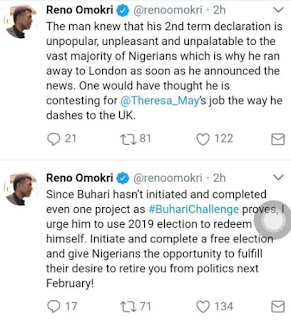