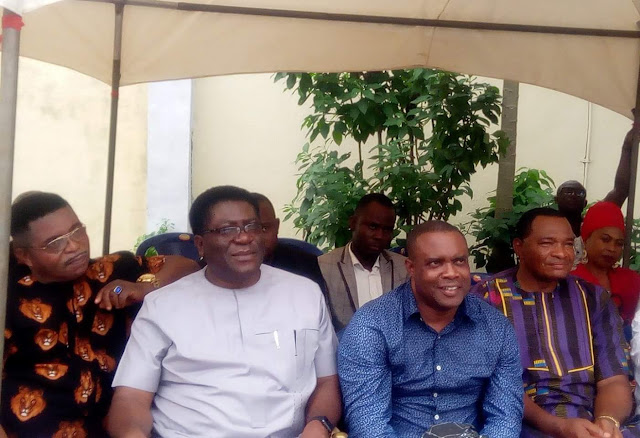 The Imo Deputy Governor  opined that he has been tested, trusted, and have the maximum experience and vision to transform Imo state, adding  that his reason for rejecting the senatorial offer by Gov. Okorocha, is in line with the lamentation of his Owerri people to have a feel of the governorship position,which rightfully points to Owerri zone.

" One who is rejected can not reject himself, I have every opportunity to accept any offer. 13 years ago I ran for Senate, If is Senate Owerri people want I would have accepted it.

But I want to tell you that this your son has been tested, trusted,i have seen it all and I have a vision of where I want to take Imo state. Owerri people want to occupy Government House, and I am a good marketable product for that actualization".Madumere

He continued by saying that he has gathered enough polical experience over the years, however pleaded with the people of Ikeduru LGA to queue up with his vision to reposition the state,  according to him, he is ready for the battle to occupy Douglas House come 2019.

One of the Ikeduru Leaders who identified his name as Rt. Hon. Peter Aka, said that Owerri zone has a stake in what is happening in the state, affirming that this is the right time for the zone to occupy Government House,and Madumere as the best candidate to support.

In his speech the chief host, Chief Sam Aka, expressed joy over the intention of   the Deputy Governor to run for the guber  position the former IKeduru Lga Chairman opined that Owerri zone will produce the governor of Imo state, and that Madumere is very prepared for the race.
Posted by IfeanyiCy Njoku
Labels: Politics