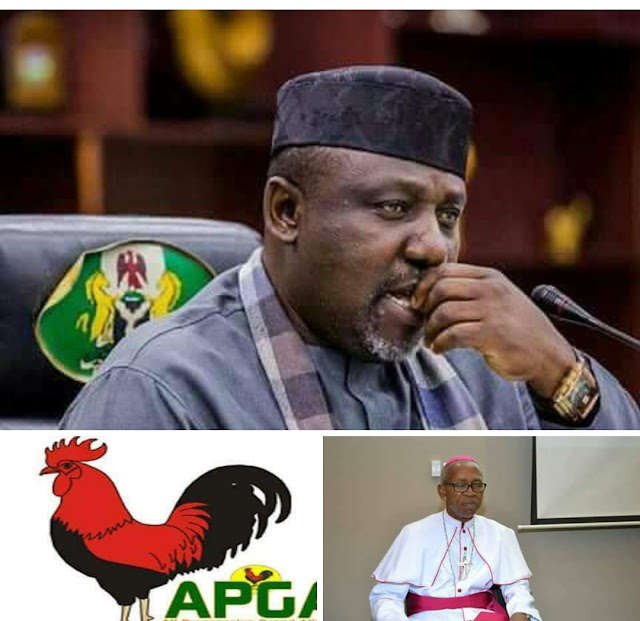 In a press statement made available to Ifeanyicy.com by the the Chief Press Secretary to Imo State Governor, Sam Onwuemeodo, captioned "WE RESPECT ARCHBISHOP OBINNA BUT HE CANNOT INSTALL AN APGA GOVERNOR IN 2019, with a ridder, "WE CHALLENGE HIM TO NAME ANYBODY ARRESTED OR IMPRISONED BY GOV. OKOROCHA OR THE GOVERNMENT SINCE 2011 AS HE ALLEGED".

According to the chief Press Secretary, "Of all the allegations the Archbishop made against the governor, the most unfortunate, was the one he said that, “Governor Okorocha is the only voice which everyone has to listen to and obey, otherwise, arrests and imprisonments would follow” and the Governor has seen it as "the height of blackmail", coming from the Archbishop.
The statement read in parts "We have read the latest accusation by Archbishop Anthony Obinna of the Catholic Diocese of Owerri against Governor Rochas Okorocha, and we shall continue to show our respect for the Archbishop, but one fact remains sacrosanct, he cannot install a governor of APGA extraction in 2019 because he could not also do that in 2015 when he first tried it.

"The Archbishop had hidden under his Easter Message Press Conference to continue his onslaught on the governor, Owelle Okorocha and his Rescue Mission Government, making it the tenth time in less than two months the Church leader had descended on the governor and the administration.

"Of all the allegations the Archbishop made against the governor, the most unfortunate, was the one he said that, “Governor Okorocha is the only voice which everyone has to listen to and obey, otherwise, arrests and imprisonments would follow”. This is the height of blackmail.

"And we humbly wish to challenge the Archbishop to mention just one person, the governor or government has arrested for any reason including criticizing him or anybody the governor has imprisoned since he came on board as governor in 2011.

Where the Archbishop fails to do this, we ask with every sense of politeness that he corrects that false claim and if he deems it worth-doing, apologize to the governor."

" Of all the governors that had governed the State both Military and Civilian, Okorocha stands out to be the most tolerant and accommodating. We stand to be challenged on this assertion.

The overwhelming love of Imo people for the governor means more to us than the weak voice of the opposition in the State made up of few Politicians."

" It has become obvious that the Archbishop has intensified his disdain or hatred for APC, President Muhammadu Buhari and Governor Okorocha this time because of the 2019 election. And the Archbishop should know that most people have become fed up with his repeated unprovoked and unwarranted attacks on the governor and his government using every platform and every event available to him. We do not think that the Archbishop should be doing that for the benefit of a particular Political Party or certain Politicians.

Our happiness is that majority of the members of his Diocese do not share the same views with him."