Menu
Home » Celebrity gist » Wow: Just Like Tuface Idibia, Tiwa Savage Now Has A Street Named After Her In Lekki

Wow: Just Like Tuface Idibia, Tiwa Savage Now Has A Street Named After Her In Lekki 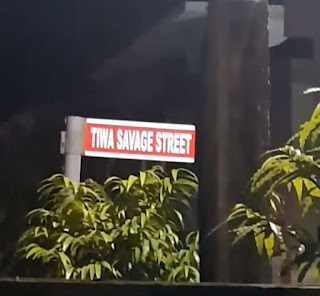 Without a doubt, Tiwa Savage is one of African’s finest female entertainers and is finally getting some very serious recognition and reward for her achievement over the years.

The mother of one has just added a feather to her cap as a street is named after her in Lekki phase one.

Tiwa Savage who has won countless awards home and abroad might not be as excited with the plaques as she would be with this new recognition bestowed on her in Lagos, an indication that she is seen, she is heard and she is appreciated.

According to Tubaba who already got a street name after him about a year ago, Tiwa Savage’s street is just off his own street!

Nigerians on social media users have congratulated the singing sensation on the new development.
Posted by Unknown
Labels: Celebrity gist