Menu
Home » Sports » Why We Lost To Nigeria; Moses Penalty Was Wrong Call - Lewandowski Reacts To 1-0 Loss To Nigeria

Why We Lost To Nigeria; Moses Penalty Was Wrong Call - Lewandowski Reacts To 1-0 Loss To Nigeria 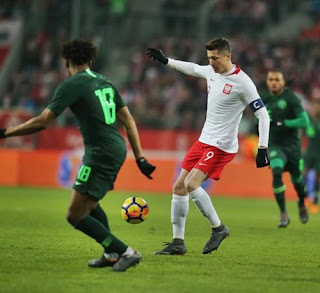 Poland captain, Robert Lewandowski has blamed the side’s lack of bravery as the main reason for their defeat against Nigeria in Friday’s friendly game at the Municipal Stadium, Wroclaw, Completesportsnigeria reports.

The Poles went down to a 1-0 defeat in the game with Chelsea wing back Victor Moses winning a penalty and then dusting himself up to convert from the spot in the 61st minute to hand the Super Eagles a win.

The home side created a number of goal scoring opportunities in the game but were let down by their poor marksmanship and fine goalkeeping by Francis Uzoho who grew into the game after a shaky start.

“Maybe we were too scared to attack when we had the ball. Defensively, we looked really good, except for one situation when the player (Victor Moses) passed three players and entered the penalty area,” the Bayern Munich forward was quoted after the game by sportdziennik.pl.

“We will be training hard to to improve on our performance at the World Cup. I think that Rafał Kurzawa and Przemysław Frankowski played a very good game and showed that they have the quality to play for us."

Lewandowski also stated that the centre referee, Micheal Oliver made a mistake by awarding the penalty that led to the winning goal.

“Nigeria probably did not create too many goal scoring opportunities, in addition, the penalty awarded to them was not a penalty although the referee told me that he whistled because he saw the reaction of “Pebble” Marcin Kaminski.

“We have definetely been able to learnt a lot of lessons from the game and draw many conclusions from it. It’s just a friendly match, so it’s hard to compare, there will definitely be other matches at the World Cup.”
Posted by Unknown
Labels: Sports