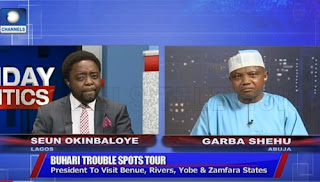 While speaking during a Channels TV programme, the senior special adviser to the president on media and publicity, Garba Shehu, disclosed that President Muhammadu Buhari's visit to Benue state is not politically inclined.

While many Nigerians feel that Buhari’s visit to Benue where 73 persons were reportedly killed by herdsmen in January, is coming late, Shehu said the president chose to act on the killings rather than merely visiting the place, adding that the president was engaging in more of acting than talking to stop the killings.

He said: “Before the president’s visits, a statement was issued that he will be going there. He thought now is the best time to go there and see things on the ground and make important decisions.

“I would have thought that if he had intended to inject politics into it, he would have been on the plane the morning after the incident (in Benue).

Shehu also berated those accusing the president of “playing politics” with the killings. “They are just celebrating and exalting over all of these matters instead of coming together so that we can solve the problems,” he said.
Posted by Unknown
Labels: News