We Deserve Praise For Apologizing To Nigerians - PDP 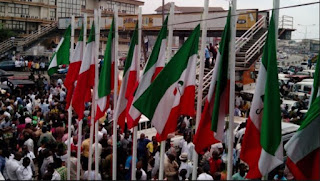 The spokesperson of the Peoples Democratic Party (PDP) on Monday said the party deserves to be congratulated for having the confidence to apologise to Nigerians.

DAILY POST recalls that the National Chairman of the Peoples Democratic Party (PDP), Mr Uche Secondus, had apologised to Nigerians for what he described as mistakes the party made while in power.

He made this public apology while delivering a speech at an event in Abuja with the theme: ‘Nation-building: Resetting The Agenda.’ Secondus admitted that although the party did its best while in government, it was not void of mistakes.

Reacting to question on if the PDP was truly remorseful and if the party deserves Nigerians’ trust to be re-elected into power, Ologbondiyan said PDP should rather be congratulated for owning up to its past mistakes.

“I expected you to congratulate the Peoples Democratic Party for having the courage to confront Nigerians and apologise. We have not only apologised as a party, we are very remorseful,” he said.

Ologbondiyan also explained further why the party apologised to Nigerians over past mistakes. According to him, the party was apologising because it allowed the nation to slip into a ‘pathetic situation.’

“Our apology has to do with the fact that we allowed a movement that has no structure to take over the governance of this nation and push Nigerians to a situation of hunger and starvation and to a pathetic situation, so much that the world is contemplating how they can help us.

“That is the essence of our apology,” he said.

Ologbondiyan also boasted that the party had turned a new leaf and learnt from its past mistakes, thereby seeking Nigerians’ trust to return to power.

He said, “The PDP is the most mature and experienced party. We have seen it all, we have made mistakes in the past but we have come anew. Our party has started a new life.”
Posted by Unknown
Labels: News, Politics