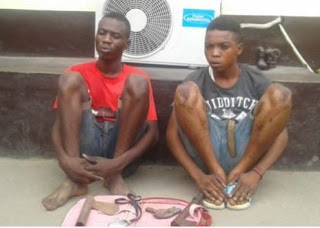 Two alleged cultists, Adebayo Oluwafemi (18) and Kehinde Olumide (19) have been apprehended by officials of the Lagos Neighbourhood Safety Agency, LNSA in the early hours of Friday with two dangerous weapons and a locally made gun in their possession.

Speaking after their arrest, the Chairman of Lagos Neighbourhood Safety Agency, LNSA, Israel Ajao (RTD) restated the resolve of the Agency to remain committed to its “ Clean Up Lagos” exercise.

He said the two cult members were apprehended at Imota area of the State during a recent midnight patrol.

According to Ajao, the frequent complaints from the residents of Ori-Okuta in Imota area of Ikorodu was not unconnected with the activities of the arrested suspects whom he said confessed to being members of KK-Confraternity and Aiye Secret cult respectively.

He decried the influence of the duo and other members of the cult groups on school children within the area, especially the students of Imota Grammar School who engaged in nefarious acts.

In his words, ”most of the problems that had arisen in the past from this school and the community as a whole is traceable to the activities of these cult members who forcefully recruit students and dispossess people of their belongings” .

He informed that the agency had mobilised its officials to Imota area of Ikorodu for some fact-finding and additional information on the activities of the cult groups.

“The most important part of our operation is that in as much as members of the public continue to support us and provide us with useful information, we will not hesitate to extend our operation to any part of the State and arrest all evil perpetrators within the society and neighbourhood”, Ajao maintained.
Posted by Unknown
Labels: News