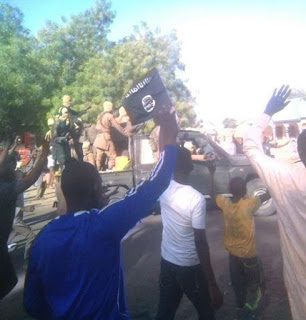 The Dapchi community in Yobe state on Wednesday, was filled with security operatives, Non-Governmental Organisations (NGOs), parents and well wishers as the abducted school girls were brought back home by their abductors, Boko Haram terrorists around 8.00 a.m.

According to a new report, the Islamic terrorists while dropping off the girls, issued stern warnings to the parents of the schoolgirls kidnapped from Dapchi, last month to desist from sending their girls to school and advised that they marry them off instead.

The News Agency of Nigeria reported that one of the Dapchi residents identified as Mohammed Ali, said the terrorists argued the girls should be married off instead going back to school.

The terrorists who had driven the schoolgirls back to the town early on Wednesday, March 21, 2018, a month after abducting the girls from their school hostel, warned witnesses that the girls should never be put in school again.

Mohammed Ali said that “the girls were personally brought back by the insurgents.
“I shook hands with two of them, very young men but well armed.

“They warned us against sending girls to school, arguing they should be married,” he said. “I personally picked some of the girls to their houses in my car,” Ali said.
Posted by Unknown
Labels: News