Super Fans: Checkout How This Man And His Family Celebrated Barcelona's Win Against Chelsea (Photos) 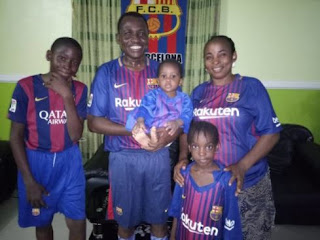 Eberiye Christopher is a hardcore Barcelona fan and there cannot be a doubt about it judging from what he has been seen doing.

Eberiye,in the spirit of celebration, ensured that his whole family including his baby daughter wore Barcelona jerseys to rejoice after the Spanish club’s Champions league qualification. 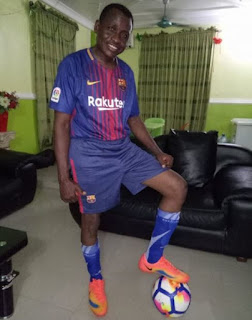 Eberiye, who apparently woke up in a happy mood, continued with his excitement as he shared a picture of him flying the Barcelona flag on his way to work this morning in Yenagoa, Bayelsa state capital.

According to him, ‘he’s going to a suburb in Yenagoa this morning to receive some decamped fans from Chelsea to Fc Barcelona’. 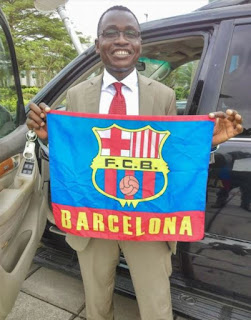 It will be recalled that Barcelona put on a spectacle on the Nou Camp stage as they beat Chelsea to seal their place in the UEFA Campions League quarter finals.

Lionel Messi score two goals and also gave a superb assist to Dembele for another as Chelsea crashed out of the Champions League losing 4-1 on aggregate after the first leg ended 1-1 at the Stamford Bridge.
Posted by Unknown
Labels: Gist