Soldier And Three Others Crushed To Death In Abuja 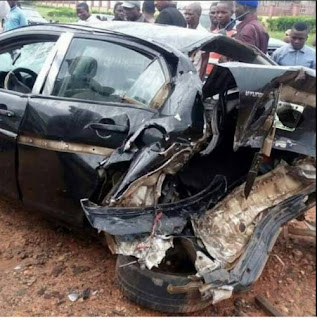 It was a sad day on Friday as a soldier and three other persons lost their lives on the Nyanya end of the Abuja-Keffi Expressway after an articulated vehicle lost control and ran into several other vehicles.

The accident left about 10 other persons with varying degrees of injuries in the accident which involved 19 vehicles.

Situation report by the obtained from the Federal Road Safety Corps revealed that the accident occurred around 9.30am.

He said, “The crash occurred at Nyanya. It involved 19 vehicles. I was told an articulated vehicle lost control and ran into several vehicles. Four people lost their lives and 10 people had varying degrees of injuries.”
Posted by Unknown
Labels: News