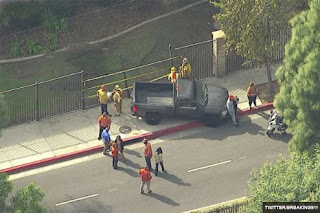 According to a report by Daily Star UK, a pickup truck has ploughed into five students while they were walking near their campus at Paramount High School in Los Angeles.

The terrifying incident occurred around 3pm local time in Los Angeles at the north-east corner of the school, according to Los Angeles County Sheriff’s Sergeant Harold Morrow.

The vehicle was out of control when it hit the students.

At least one of the students caught up in the crash is in a serious condition while the other four were also taken to hospital.

Pictures from the scene appear to show the car after it has crashed into a fence.

The driver, a 19-year-old man, was arrested on suspicion of reckless driving.

LA County Supervisor Janice Hahn released a statement following the crash: "My prayers are with the five Paramount High School students who were hit by a pick-up truck after school today and their families.

"While the details of the accident are still developing, I want to thank the LA County Firefighters, paramedics, and sheriff’s deputies who responded to the scene and provided aid to the students.

"I have been in touch with Paramount Unified Superintendent Dr Ruth Perez as well as school officials and am sending professionals from the County Department of Mental Health to Paramount High School tomorrow to provide counseling to students and faculty.”
Posted by Unknown
Labels: News