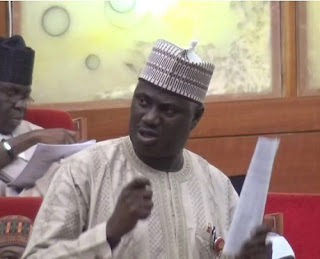 Nigerian Senate spokesman, Senator Aliyi Sabi Abdullahi, has explained why a death penalty sentence was included in the hate speech bill and fired at those opposing it.

The bill which passed for second reading at the Senate, prescribed death by hanging for any person found guilty of any form of hate speech that results in the death of another person.

A barrage of criticisms have trailed the introduction of the bill, with many of the view that it was aimed at hunting critics of the government.

According to DailyPost, Abdullahi insists the penalty was only for those who were found guilty of any form of hate speech, that results in the death of another person after judicial processes in a Federal High Court.

“The issue there is that why not death penalty when you are responsible for deaths of other people? After all, our present law says if you do anything that result in the death of another person and it is proven beyond reasonable doubt that you caused the death of that person, the penalty is death by hanging.

Abdullahi claimed those against the Bill had not lost a relative to violence instigated by hate speech.

“People who may be having some opposing views about it definitely are not in the category of people who have lost dear ones and family or livelihood to similar circumstances. If they are, I think they will be saying how I wish this was in place before this thing happened to me.

“We are also careful not to allow anybody take that and think he can continuously use it to oppress other people for whatever reason,” he said.

“That (victimisation) is not possible, the bill does not leave it as an administrative act.

The jurisdiction here is purely before the Federal High Court. The commission is independent and nobody can direct or influence it. The moment it is put in place, no authority can give it directives. It is independently empowered.

“They have processes through which they will do conciliations, and where there are conciliations between parties, they have to sign agreement as an undertaking to abide by whatever terms and conditions are agreed upon with that conciliation. But where it becomes necessary that a person needs to be charged to court, it must be the Federal High Court for prosecution and at the court, you are entitled to your counsel.

“The commission is expected to do conciliation first and that is why they are also expected to monitor under their functions and when they monitor and see different kinds of people who are already going in the way of hate speech, they will draw cautions.

“By the time you get about five people that some people are involved in this kind of speech and they are being asked to refrain which they did, then you can see that we are already taking preventive measures,” he added.
Posted by Unknown
Labels: News