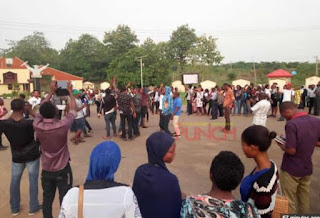 A report by Punch Metro has shown that scores of students of the Moshood Abiola Polytechnic, Abeokuta, stormed the institution Monday morning (today) and shut the main gate leading to the school, effectively denying academic and non-academic staff access into the compound.

It was gathered that the final year students at the Higher National Diploma level formed the bulk of those responsible for the locking of the school gate.

Sources among them said they were protesting the non-release of their final year results by the academic staff.

The students had concluded their final examination in January 2018, and had hoped to be mobilised for the one-year National Youth Service Corps programme in April 2018.

They argued that with the delay in the release of their results, it is uncertain that they will be able to meet up with the April batch.

It will be recalled that trouble started in the institution between the academic staff and the state government in January 2017 over the proposed transformation of MAPOLY to Moshood Abiola University of Science and Technology, and the establishment of the new Ogun State Polytechnic, Ipokia.
Posted by Unknown
Labels: Education, News