Onlookers Horrified As Passenger Is Killed By Train Inside Busy Station 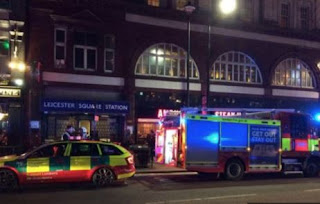 A passenger was hit by a train at London’s busy Leicester Square station prompting paramedics to rush to the scene.

Daily Star UK reports that emergency services were alerted to the horrific death at one of the capital’s busiest stations at about 7.45pm on Wednesday.

The station was evacuated while officers carried out their investigations.

British Transport Police (BTP) have since said it is not treating the incident as suspicious.

The station – popular with passengers travelling to tourist hotspots and the West End – was shut and there were severe delays on the Northern Line.

A Transport for London spokesman said on Twitter: “Severe Delays Camden Town – Kennington via Charing Cross, due to an earlier customer incident.

“Tickets are being accepted on local buses. Good service on the rest of the line.”

A BTP spokesman later added: “A person has sadly died after they were struck by a Northern Line train at Leicester Square London Underground station this evening.

“Officers from BTP were called at 7.43pm and attended alongside paramedics from the London Ambulance Service.

“They remain on scene, working to ID the person to inform their family. This incident is not being treated as suspicious and a file will be prepared for the coroner.”

The victim’s age and gender has not been disclosed.
Posted by Unknown
Labels: News