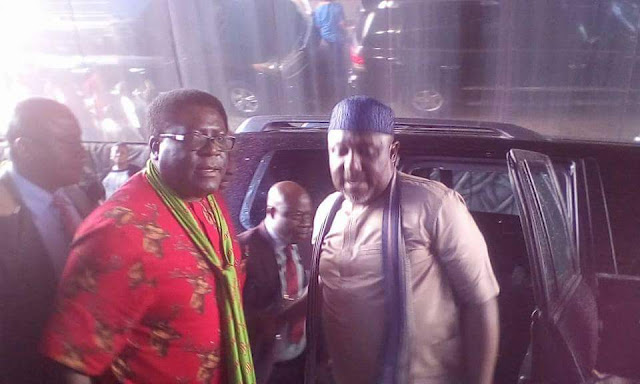 
“Never be afraid to try something new. Remember, amateurs built the ark, professionals built the Titanic”

With the above quote from the Deputy Governor of Imo State, Ezeakonobi Madumere, one needs no soothsayer to predict that internal schism has started ravaging the once notable one political family; the Rescue Mission Government, baptized as “Agburu Anyi” and  controlled by the state governor, Rochas Okorocha.

On coming into power in 2011, the incumbent, Okorocha began a process to carve a niche for himself in the act of governance and building a political structure. Part of what he has achieved today after seven years in office is the establishment of a strong political structure known as the Rescue Mission. As the 2019 election is drawing nearer and the need to strengthen his structure against the opposition within and outside the APC, Okorocha tried to create a divisive slogan to differentiate his followers from others by inventing the words “Agburu Anyi” literally meaning “our race”

Among the top chiefs of the Agburu Anyi political family is the Deputy Governor, Madumere. The story of Madumere, a Prince of Achi Mbieri in Mbaitoli LGA cannot be written without mentioning the name of Okorocha. Both has a history that dates back more than two decades and can be said to be unique political soul mates before entry into Government House, Owerri.

Details of how they met and fused may not be necessary here, but it is pertinent to note that Okorocha and Madumere can be likened to Siamese twins until things started falling apart. A brief about their relationship shows that the Deputy during the advent of our nascent democracy in 1998, served as the Women and Youth Mobilization for the Governor in PDP. He also served as Chief Strategist on media and logistics for Okorocha’s Presidential bid in 2002-2003 under the ANPP. He was also reported to have served Okorocha in the Presidency as Chief of Staff  when he was Special Adviser to Obasanjo on Inter Party Relations. It is not also hidden that during the 2011 election campaigns, Madumere was arrested and thrown into police cell for alleged acts against the state.
I can also vividly recall that as a practising journalist in Owerri, it was difficult to access Okorocha for an interactive session between 2003 to 2011 without the express guarantee of Madumere who acted as the Chief of Staff. Among the present associates of Okorocha, the Deputy may emerge the best to write the governor’s trajectory in politics. It was not surprising therefore  that on emergence as the governor, Madumere was appointed Chief of Staff to the Governor.

The affinity between the two manifested again in 2013, when the then Deputy Governor, Jude Ejiogu was impeached by the Imo State House of Assembly, creating a chance for Okorocha to find Madumere worthy enough to come in as a replacement. In 2015, Okorocha didn’t also hesitate to pick him as running mate for the governorship election.

In the suspected consanguinity, Madumere undoubtedly exhibited self-effacement to earn the toga of Mr Humility before the governor. In one case the governor was quoted as describing Madumere as his “trouble free” deputy. Even in the face of  humiliation, he lacked ego to protest. When provoked with Government House, Owerri,  policies that undermine his position as the number two person in the state, Madumere ironically consoled himself with the  traditional muffler; a trademark for Okorocha followers and believers of Rochanomics.

If there are ranks  allocated to the  Agburu Anyi political family, Okorocha would be the General Officer Commanding while Madumere the 2iC.

But the centre can no longer hold again, the Agburu Anyi empire is on fire, no thanks to the decision of the governor to allocate the APC governorship ticket to his son in law and present chief of staff, Uche Nwosu. Amidst induced endorsements from all quarters, the governor has shown who to back as his successor. The decision is causing ripples in the Agburu Anyi camp.

The political matrimony between the governor and his deputy seems to have broken indicating that the erstwhile Second in Command has called it quits with Agburu Anyi political camp. It was astonishing that the regular mufflers which adorned the neck of Madumere has disappeared.

Not only that Madumere is charting a new political course different from Agburu Anyi exponents, he has called the bluff of his age long principal for not considering his interest in the scheme of things as 2019 approaches.  Agburu Anyi political family is indeed on fire if what the Deputy reportedly told his people are anything to go by.

The Deputy governor while addressing the congregation at his Achi Mbieri country home on the Lenten season reflected on agony and betrayals which Jesus Christ paid as the ultimate sacrifice for the redemption of man against eternal destruction.

The report said that in an emotion laden voice, Madumere stated that if Jesus Christ could be maltreated and betrayed by those he trusted, how much more his humble self who is a mere mortal. The deputy governor’s lamentations on his experience of agony,betrayals, insults and molestations from those he has shown love including those he nurtured to become relevant in life showed that all is not well within the Agburu Anyi political camp he was part of.

The differences in the governor’s political camp is moving to a dangerous dimension with the Deputy governor charting a new course that may be at variance with the desires of the Agburu Anyi crusaders.

Further to the implosion in Agburu Anyi political family is the reported sharp division between the governor and one of his allies who is the Chairman of the APC in the state, Chief Hilary Eke. Eke was Okorocha’s chairman when he formed Action Alliance,AA. In 2011, the fair skinned politician played pivotal role to the coming of the governor during their APGA days. He became two time Transition Committee chairman of Ezinihitte LGA before emergence as the pioneer chairman of APC in Imo State.

As one of the old reliables of Okorocha, Eke is Agburu Anyi compliant until few days ago, the bubble burst that he may not be part of the political family again. Okorocha and Eke are now said to be at daggers drawn over the leadership of APC from ward, LGA to state levels. At the National Working Committee of the party in Abuja on Tuesday, Eke voted against the interest of his governor signalling fresh war of attrition. Despite their Agburu Anyi brotherhood, Okorocha was alleged to have attended the Abuja meeting with a different list that didn’t have the name and interest of Eke. In the subsequent voting for either in support or against tenure elongation of the present Exco, Eke reportedly differed in thinking.

The split in Agburu Anyi enclave is growing deeper as interest in elective positions gains prominence. How the political family will handle the quests of Simon Iwunze, a former lawmaker and Angela Uwakwem a medical doctor turned politician for the Okigwe North Federal Constituency seat and the looming war between Uju Kingsley and Henry Okafor for the Ohaji/Egbema, Oguta and Oru West federal constituency will tell more about the survival of the group before 2019