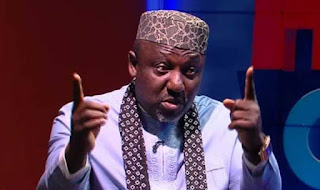 Governor of Imo State, Rochas Okorocha is in a war of words with the opposition party, Peoples Democratic Party in the state who accused him of planning to rig the next election in favour of his son-in-law, Uche Nwosu, a Punch report has revealed..

Recall that the Governor had boasted that the All Progressives Congress will control the state government for the next 24 years without any break after making his intentions known that he is supporting his son-in-law, Nwosu to become the next Governor of the state.

The Governor in a press release by his Chief Press Secretary, Mr. Sam Onwuemeodo also commented on recent reports that the Catholic Archbishop of Owerri Archdiocese, Most Reverend Anthony Obinna, was beaten and manhandled by a group of APC supporters.

He dismissed it as alleged blackmail by his political detractors.

Last Saturday, the Archbishop’s preaching during a requiem mass at Ngwoma in Owerri North Local Government Area of the state was interrupted by a group of persons suspected to be politicians.

In his statement, the Governor said “If the only issue Uche Nwosu has for which he cannot be governor is being Governor Okorocha’s in-law, then we should give America back its democracy since that is where we copied from.

Reacting to the statement, the Imo state chapter of the PDP on Thursday said the governor had advanced plans to rig the next governorship election in favour of Nwosu, who is his current chief of staff.

Addressing a press conference at the party’s secretariat in Owerri, the state capital, the state chairman of the party, Charles Ezekwem, claimed that the party had learnt of the plot and was ready for the governor.

Ezekwem said, “We have it on good authority that the APC in Imo state is working assiduously on how to subvert the will of Imo people in 2019, having become very unpopular because of its gross maladministration and record of monumental corruption.

“Its only hope now lies in rigging elections but that cannot happen again. The PDP will put in place a watertight anti-rigging formula that will shock the APC leaders in 2019.”
Posted by Unknown
Labels: News