Obasanjo Slams Buhari Again...Find Out The President's 'Sin' This Time 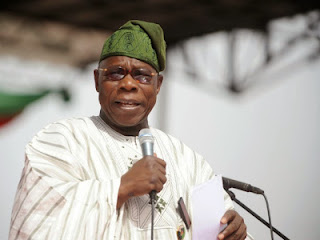 While speaking at AfCFTA event during a presidential panel, titled: "When Leaders Make History" at the Africa CEO Forum in Abidjan, Cote d’Ivoire on Tuesday, Olusegun Obasanjo decried the failure of President Buhari to sign the Africa Continental Free Trade Area agreement, expressing hope that he will change his mind before it is too late.

According to PUNCH Newspaper, the former President who poured out his mind on the matter, was joined by the President of Zimbabwe, Emerson Mnangagwa.

He said, “That President Buhari didn’t sign the free trade agreement in Kigali is disappointing; I hope he signs it before it is too late.

“Egypt started the discussion on the formation of the Organisation of African Unity but didn’t conclude it and Nigeria took over. Nigeria was also central to the discussion of the free trade agreement, but I am surprised that the country withdrew from signing.”

The AfCFTA treaty is one of the flagship projects of the African Union Agenda 2063, and is aimed at creating a single continental market for goods and services, with free movement of business persons, investments and a single currency.

Also, the agreement commits countries to removing tariffs on 90 per cent of goods and to liberalise services, while items identified as sensitive, which make up the balance 10 per cent, will also be phased out later as tariff-free.

It is believed that the AfCFTA treaty would improve intra-African trade and enhance economic growth and sustainable development.

Obasanjo had last week while speaking in a video posted by NBS Rwanda at African trade agreement, criticised African presidents who refused to sign the trade agreement.

He described their reason not to assent to the trade agreement as ‘mere flimsy excuse and criminal.’

He said: “I’m surprised that any African leader at this point in time will be talking about either not understanding the Continental free trade area or not to support what we’re going to sign. I see that as criminal.

“The signing and implementation of the African Continental Free Trade Area (AfCFTA) will enable a shift from dependence on assistance to increased trade.

“That is where our salvation lies, trading amongst ourselves and consequently developing our economies. The agreement will inspire a change a perception of the continent by the rest of the world,” he said.
Posted by Unknown
Labels: News, Politics