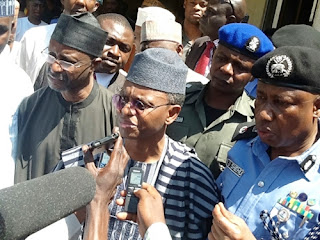 While speaking on Thursday in Abuja at a ‘Governance Matters’ roundtable organized by the Development Alternative Incorporation (DAI), Kaduna State Governor, Mallam Nasir El-Rufai, lambasted the organized labour unions in the country, saying they have destroyed the nation more than they have contributed to it apart from being irresponsible.

According to DailyTrust , the governor who disclosed that the excesses of the trade unions must be curtailed, said it is time to remove labour matters from the exclusive list to save the nation from constant confrontation by the Nigerian Labour Congress (NLC) and other organised trade unions against popular government policies especially in the areas of education and health.

He said: “Trade Unions have never served the country well. They have been selfish and everything is about their narrow interests. In general, in Nigeria, trade unions have been a danger to our progress and I think they should be curtailed. The mistake we made as a country was placing trade unions in the Exclusive Legislative List.

"If the Academic Staff Unions of Universities (ASUU) has an issue with the Federal Government, the state universities will go on strike too. We need to take labour matters out from the exclusive list so that the principle of no work, no pay could be effectively used to stop labour arrogance of unnecessary demands from government which has helped to kill our educational system and health sector.

“In Kaduna, I warned the Kaduna State University, that if you ever go on strike again because of somebody else, I will fire all of you. I think the health unions have been the most irresponsible because only an irresponsible doctor will abandon his patients even after swearing to the Hippocratic Oath. I think Nigerian doctors are the only ones on the planet that go on strike,” he said.

On the minimum wage discuss, he said, “I think we need to do some things. First, take labour matters out of the Exclusive List because many of us are victims of agreements reached with ASUU by the federal government. The states were never part of such agreements.

"Secondly, is the issue of minimum wage, except we set a very low minimum wage, there will continue be issues especially with states that do not have wide tax net. You cannot set the same minimum wage for Lagos and Jigawa. Also, we must apply the labour laws strictly. No work, no pay, because there has to be a trade dispute before anything strike. That is what the law says.”
Posted by Unknown
Labels: News