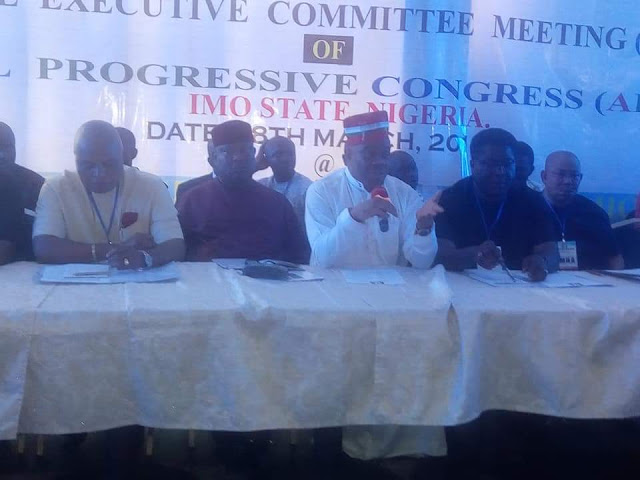 Life was suddenly restored to the crisis-ridden ruling All Progressive Congress Party in Imo State penultimate Sunday March 18th, 2018, in a widely attended Stakeholders Meeting held at Sam Mbakwe Hall  of Imo Concorde Hotel Owerri, as the Imo State born- National Organizing Secretary of the Party and former Senator that Representated Imo West in the Upper Chamber of the National Assembly, Distinguished Senator Osita Izunaso (Kpakpando), in his keynote address set the ball rolling, with reassurances to the teeming despondent party faithful that there would be a level playing field in all activities of the Party henceforth especially as it concerns the forthcoming party primaries and local government elections.

Speaking further, the renowned philanthropist of Kpakpando foundation firm, posited that every party man and woman would enjoy equal and unhindered, attention and recognition as nobody should harbor any form of fear of intimidation or victimization from any quarter as the National Working Committee of the Party in its recent meeting had put to rest the lingering rumors of possible suspensions and victimization of party officers with divergent views and inclinations.

He used the opportunity to congratulate the officers of the Party at all levels for the extension of their tenures for a period of one year, adding that everybody would enjoy the dividends of serving and working towards the party victories in previous elections.