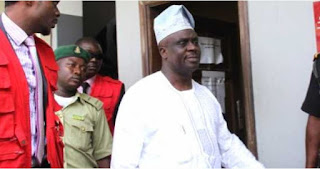 According to Punch Metro, the Economic and Financial Crimes Commission said it on Tuesday had recovered N2.4bn and $115,000 from a former Chief of Air Staff, Air Marshal Adesola Amosu, who is being tried for an alleged fraud of N22.8bn.

An investigator with the anti-graft agency, Tosin Owobo, told the Federal High Court in Lagos on Tuesday that the agency recovered the $115,000 in cash from Amosu’s house.

Owobo appeared as a prosecution witness before Justice Mohammed Idris, who is presiding over the trial of Amosu and 10 others.

Joined with them in the charges are eight companies, which they allegedly used to siphon the N22.8bn from the coffers of the Nigerian Air Force.

Led in evidence by the prosecutor, Rotimi Oyedepo, Owobo added, “About N100m was recovered from the third defendant, Air Commodore Gbadebo.

“Funds were also left over in the St. Solomon’s UBA account, recovered through the first defendant’s wife.

He added, “Various landed properties and buildings were recovered from the second defendant.”