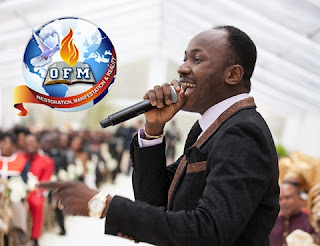 The general overseer of Omega Fire Ministries (OFM), Apostle Johnson Suleman, who always released New Year prophecies for some years now, released 50 shocking prophecies about the upcoming year and some of them are beginning to come to pass.

According to number 31 of his prophecies, Apostle Suleman predicted that some school children would be kidnapped and on Monday, February 19, about 110 students of the Government Girls’ Science Technical College, Dapchi, Yobe state, were kidnapped.

Apostle Suleman warned during one of his Sunday services that: “I see kidnappers entering schools.”

See some of his prophecies below:

1. I see terrorism on the increase
2. Federal Government of Nigeria should not relax yet on Boko Haram. It’s a deception.
3. Buhari to face impeachment threats.
4. America and China to have major face-off
5. Crude Oil to flow in northern Nigeria.
6. Abuja to experience major fire explosion.
7. Donald Trump to face impeachment attempt as members of Congress will be divided on his style of leadership.
8. I see an airplane that has Nigeria’s logo (National Carrier)
9. Things will pick up a bit in Nigeria but hunger will persist.
10. I saw people crying over Bamanga Tukur
11. Buhari will be bereaved in 2017 12. Ecobank, Diamond, Fidelity, GTB to retrench staff
13. President Buhari’s health needs attention
14. 2017 budget will have crises
15. More judges to be humiliated
16. MMM to dupe more Nigerians and I see court cases.
17. Dollar to exchange for N615
18. Recession in Nigeria to become depression in 2017
19. MTN and GLO to face hardship
20. A former First Lady of Nigeria needs prayers over her health.
21. Forces in Aso Rock planning to poison current First Lady (Aisha Buhari)
22. I saw huge number of Chibok girls released; some of them with kids
23. Nnamdi Kanu’s detention to cause international crises. God is angry with Buhari for the continued detention.
24. Donald Trump to favour Israel. American Embassy in Israel to be moved to Jerusalem.
25. Liberian election: CONTINUITY
26. Ghana’s new president to send many to jail.
27. Buhari and Senate to have crucial disagreement.
28. Nigeria’s Budget will be delayed
29. I see killings in Ekiti
30. EFCC to come after National Assembly members in Nigeria in a politically motivated arrests because of their refusal to confirm Magu
31. I see kidnappers entering schools
Posted by Unknown
Labels: News