Horror: Fulani Herdsmen Cut Off Man's Toes And Fingers Inside His Farm In Abraka 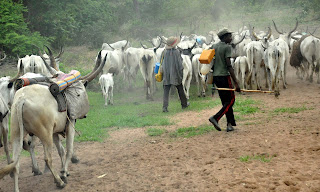 It has been reported that some suspected herdsmen have chopped off the fingers and toes of a farmer identified as Osakwe Benard, in Abraka, Delta State, for trying to stop them from grazing their herd on his farm.

Vanguard reports that the man, Osakwe Benard, 48, and a father of five, narrowly escaped death as his assailants fled the scene after his cry attracted other farmers in the area, who rescued him.

“Osakwe had gone to his farm when he saw the herdsmen grazing their herds on his farm.

“He started screaming for them to leave, not knowing that one of them, who held him for the others, was lurking behind him.

“They chopped off the entire toe area of his leg to the middle and the fingers of his two hands were also cut off.”

On efforts being put in place to checkmate the activities of herdsmen in the area, Ivwurie, who stated that the people had resorted to self-help in protecting themselves, said: “We have been able to locate seven different spots these herdsmen use as their bases.

“The vigilante, with assistance from the Police, is making preparations to dislodge them and there are moves by the state government to strengthen the vigilante with Okada and hilux trucks to patrol the area for the safety of our people.”
Posted by Unknown
Labels: News