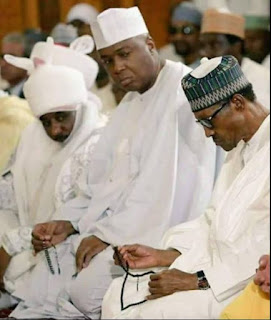 Some ridiculous Nigerians are drawing conclusions from a picture of President Muhammadu Buhari, Emir of Kano Muhammadu Sanusi II and Senate President Bukola Saraki praying at the Aso Rock Villa mosque in Abuja.

In the photo taken in the year 2015, it appeared Saraki, a former governor of Kwara State was going to beat Buhari up as he prayed. The look on the Emir's face also appeared similar to the alleged scorn in Saraki's face.

Fast forward to 2018, Saraki and his senator colleagues have disagreed with Buhari on the appointment of the EFCC boss, Ibrahim Magu, amendment of electoral act, tagging members of the Independent People of Biafra terrorists, the Peace Corp establishment bill and other disagreements on the national appropriation bills.

Saraki has also boycotted party meetings thereby indicating that there is a discord within the party hierachy.
Posted by Unknown
Labels: News, Politics