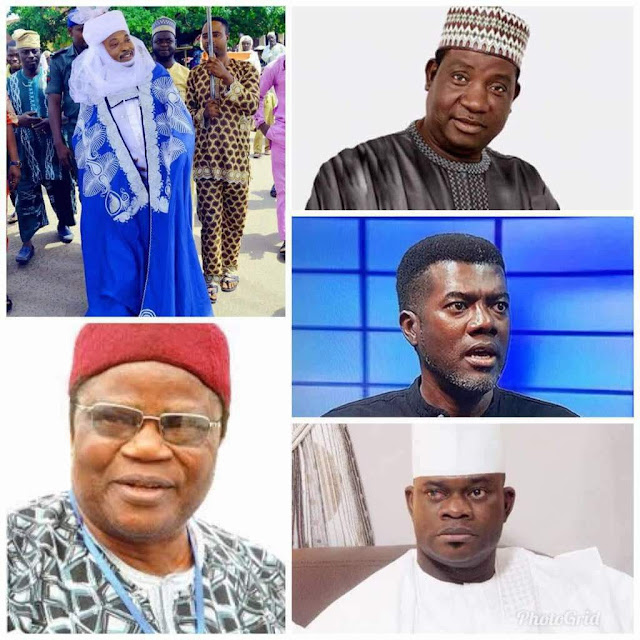 "Useful idiot" is a political term which is often used to describe the misguided supporters of an unreasonable, irresponsible, ill-conceived and ill-advised cause.

First coined in western Europe in the late 19th century, the term was made all the more popular by its usage in Mona Charen's excellent book titled
"Useful Idiots: How Liberals Got It Wrong in the Cold War and Still Blame America First" which was published in 2003.

I believe that it is a term which adequately describes some of our politicians, leaders, writers and public commentators in Nigeria and as a matter of fact it is well-deserved.

Two weeks ago and a day after Fulani terrorists slaughtered 35 innocent and defenceless people, including women and children, in his state, Governor Yahaya Bello of Kogi state said,

"Fulani herdsmen killings in Kogi state is a family affair, we shall resolve it".

His tepid reaction attracted national and international angst and public opprobium but Bello apparantly did not "give a damn" and neither did he tender an unreserved and public apology for hurting our collective feelings or offending our sensitivities with these words.

There is nothing that I despise more than those with a slave mentality. And nothing reflects that pitiable condition more than Yahaya Bello's luke warm response to this utterly outrageous event.

Three days after the young Governor spoke these irresponsible words, the Fulani herdsmen, who were obviously encouraged and emboldened by his shameless disposition and the implementation of his cowardly policy of appeasement, struck again and killed a traditional ruler, his wife and 9 other innocent souls in Kogi state.

They burnt the palace and homes of their victims and as they fled they shot them, slit open their throats and removed their body organs and vital parts.

That is the price that is being paid and the monumental tragedy that has befallen the people of Kogi who are evidently stuck with a Governor that is prepared to sit by idly and openly encourage and espouse those that seek to wipe out his people from the face of the earth and take all their land by the force of arms.

There is no greater shame or betrayal of a mandate than this.

The only one that comes close to it is Plateau state's Governor Simon Lalong whose intervention, after the mass murder of hundreds of members of the indigenous population in neighbouring Benue state by Fulani herdsmen a few weeks ago, was equally shameless and offensive.

Lalong expressed the view that the blame for the genocide that was being perpetuated against the people of Benue state ought to be placed, not at the doorstep of their killers, but rather with their Governor, Samuel Ortom.

He went further by telling the world that he had warned Ortom about the implications of passing an Anti-Grazing law in his state and that by passing that law he had upset and provoked the Fulani herdsmen.

This coming from a Christian brother and fellow Middle Belt Governor!

Sadly, and as a graphic example of the grovelling appeaser that was compelled to eat his own faeces and the village idiot that was forced to drink his own urine, a few weeks later Lalong's own people in Plateau state, where he had evidently refused to pass an Anti Grazing law, were butchered by the same Fulani terrorists and herdsmen.

Is this poetic justice? I think not because the people of Plateau state do not deserve it. It is more of a tragedy of monumental proportions and it is indicative of the consequence of being saddled with a primitive, cowardly, insensitive and grovelling field hand as a Governor who fails to appreciate the fact that adopting the line of least resisitance and implementing the shameless policy of appeasement, coupled with the unconsciable display of crass weakness, attracts nothing but aggression and does nothing but encourage the bully and the aggressor.

Whichever school he went to, if any, never taught him that in order to preserve the peace you must show strength and a willingness to fight, even against all odds, when pushed against the wall.

Many in Nigeria appear to have failed to learn this basic lesson and that is why we are in the mess that we are in.

Sadly the perfidy and slave mentality of men like Bello and Lalong pales into insignificance when one considers the deceit, self-serving doublespeak, servile disposition and intellectual dishonesty of others.

Let me give an example.

Yet the other day Pastor Reno Omokri (AKA Wendell Simillin), a notable columnist and public commentator who launches scathing, commendable and, I must confess, laudable attacks on the Buhari government from the relative safety of his home in the United States of America attempted to rationalise Vice President Atiku Abubakar's inexcusable faux pax by suggesting that Fulani herdsmen should not be tagged "Fulani" herdsmen, "Fulani" terrorists or "Fulani" militants.

Left to him we ought not to mention the word "Fulani" in this context.


His sordid attempt to becloud the issues and shade the truth has exposed him for what he is and has proved beyond any reasonable doubt what he really stands for.

It has also proved that he has no guts, no substance and limited intelligence.

Prince Tony Momoh, a Buhari loyslist, the Minister of Information in President Ibrahim Babangida's government, and a man that I have always held in high esteem, appears to have also been afflicted and has said the same thing.

Last week he said the following to the Sun Newspaper.

“Anywhere you go to people would say we cannot go to farm because of the Fulani herdsmen. This is when as a matter of fact the Fulani herdsmen are in more danger than any other Nigerian. Do we talk of Igbo armed robbers? Do we talk of Yoruba 419ers and so on? We talk of all these as crimes and we should be talking of the killings as also a crime. But because of politics, we are going into areas to make our children believe that the fear of Fulani herdsmen is the beginning of wisdom. So what Othman Dan Fodio could not achieve when he was alive in Nigeria we are achieving it through communication and making our own children afraid of the Fulani. Remember that the Fulani are in the minority in this country".

One wonders what has got into him, Reno Omokri, Simon Lalong, Yahaya Bello and all the other "useful idiots" who are falling over themselves to play down and obsfucate the hideous atrocities that the Fulani terrorists and the barbarians from Futa Jalon have unleashed on our people over the last three years.

Do they have to wait until one of their own loved ones have had their throats slit open, their blood drained, their eyes removed, their genitals cut out out and their bodies hacked into pieces before they see this whole thing for what it is and admit to who is behind it?

When a Governor says that it is "a family affair" when such things happen to the very people he is meant to defend and charged to protect under the constitution and when he does not call for justice for the victims of the carnage but rather says the matter will be settled amicably you know that you are dealing with an insensitive beast that is not only depraved but also sociopathic.

Worst still this is a Governor that has refused to pay the salaries of his personal staff and the state's civil servants for many months and that spends most of his time trying to lock up, silence, frame up and intimidate his perceieved enemies, even when they are members of his own party.

Forgive my strong language but there is no need to be diplomatic when you are dealing with a low life and an imbecile. And the truth is that such a man is almost as vicious, heartless and unconsciable as the Fulani herdsmen that he seeks to serve and protect.

To those that cry more than the bereaved and take offence when the terrorists are described as "Fulani herdsmen" by others, one wonders why they did not complain about the use of the word "Fulani" when the respected International Terror Index described the killer herdsmen as "Fulani militants" and informed us that they were the "4th most deadly terrorist organisation in the world?"

.
Why did they not complain when the Chairman of Miyetti Allah, Bello Abdullahi Bodejo, the Sultan of Sokoto, the Emir of Kano, the Emir of Zazzau, the Emir of Katsina, Governor Nasir El Rufai of Kaduna state, Governor Abdullahi Ganduje of Kano state, Professor Ango Abdullahi, the spokesman of the Arewa Consultative Forum, Mafindi Danburam, the north-eastern zonal Chairman of Miyeti Allah, Garus Gololo, the leader of Miyetti Allah in Benue state and all the other Fulani leaders described the herdsmen as "FULANI" herdsmen?

Ganduje, who is probably the most forthright and honest of them all when it comes to this matter proferred a practical solution to the conflict by saying that all the Fulani herdsmen should return home to the core north and specifically to Kano where, he said, there was "plenty of grazing land for them all" and that, in any case, "that is where they belong".

Ango Abdullahi had a different perspective and went as far as to say that the Fulani have every right to take their cows anywhere they like in the country including to peoples private land, homes, schools, places of worship and farms.

He said that the Fulani herdsmen had no choice but to butcher and kill those that stood in their way because they had been given what he described as an ancient right to what he decribed as "cattle routes" which he claims were given to them by our ertwhile British colonial masters as far back as 1904!

He said that the Fulani were compelled to slaughter all the innocent men, women and children that they met because they themselves were often insulted, provoked, robbed and attacked by members of the indigenous population and host communities.

He offered no apology for the genocide, ethnic cleansing and mass murder that the Fulani unleashed on the defenceless and innocent civilian population.

And neither did he explain why they felt the need to specifically target women and children, to carve up their bodies and to remove their body parts.

Instead he simply said the barbaric actions of the Fulani herdsmen were necessary and he sought to defend, justify and rationalise them.

He also said that those who wish to stop cow-grazing and that are calling for cattle ranches have "forgotten their history", were "irresponsible and deceptive" and he ended it all by saying that "the north will never allow Nigeria to be restructured". (TO BE CONTINUED)
Posted by IfeanyiCy Njoku
Labels: Features, Opinion