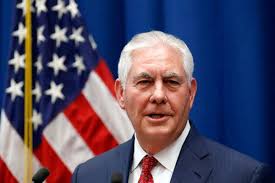 The Federal Government has said that the sack of the American Secretary of State, Rex Tillerson who was in Nigeria on Monday by President Donald Trump will not in any way have any negative effect on Nigeria's relationship with the US as government is continuum.

The Minister of Foreign Affairs, Mr. Geoffrey Onyeama said this while briefing State House correspondents after the Federal Executive Council, FEC, meeting presided over by the Vice President, Yemi Osinbajo at the Council Chamber.

Onyeama said: “Rex Tillerson sack won’t affect (Nigeria) because government is a continuum as we all know.