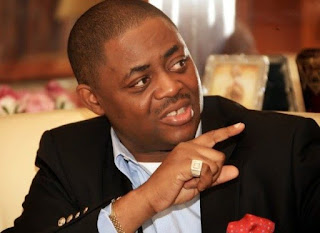 A former Minister of Aviation, Chief Femi Fani-Kayode has reacted following the release of over 100 Dapchi school girls on Wednesday.

The girls were dropped off by Boko Haram terrorists in front of the school.

The Peoples Democratic Party chieftain made his thoughts known in an article he wrote titled 'THE DAPCHI SCAM: WHERE IS LIYA SHARIBU?'

Kayode wrote: "I am happy that the Dapchi girls are all back home but I am deeply troubled by the fact that one of them was left behind and by the assertion that 5 of them died whilst in captivity.

The day the truth comes out about what really happened to the Chibok and Dapchi girls and those that were behind these two scams, Nigerians will be shocked and they will spit on the graves of Buhari and his collaborators.

Meanwhile, I saw the pictures and watched the video of Dapchi residents cheering on and waving at Boko Haram insurgents as they dropped off the “missing” girls. It was clear to me that they regarded the terrorists as heroes and I was compelled to ask myself the following question, “are we really one country?”

So many questions need to be answered. For example how do you explain the Ghana Must Go bags that the girls were carrying on their return? Did they go shopping in Sambisa Forest? Or is it that when they abducted them they gave them time to pack all their clothes and allowed them to bring them back when freed?

Another question that needs to be answered is this: why did the Federal Government lie to the international media that the girls were dropped off in Dapchi at 3.00am in the morning when the footage and pictures prove of their return prove that the whole thing was done in broad daylight.

Finally why did the government inflate the number of the girls that were abducted when the kidnapping took place six weeks ago. They claimed that 110 girls were missing after which the school and the parents set the record straight and said that 105 girls were kidnapped and not 110.

Could it be that they knew that in order to make their story more credible after money had changed hands and the girls were returned they had to be able to say that at least 5 of the girls died whilst in captivity without having to actially kill any of them?

This seems to me to be the only plausible reason for telling this lie and sticking to it to the end even though it had been exposed for what it was from the outset by the parents of the girls and the school authorities.

Finally why are the govermmrnt telling the whole world more lies by saying that no ransom was paid in return for the girls?

It is common knowledge in intelligence and security circles that vast sums of money was paid to the terrorists and quite a lot of that money was sent back to some of the govermmrnt officials that were involved in the negotiations and the scam as a kickbsck.

The point is that the whole thing was planned and agreed on well before the abduction ever took place. That is why our Minister of Defence could tell the Nigerian people just a few days ago that the girls would definately be released within 2 weeks at the most.

A few days later they were dropped off by their terrorist abductors in Dapchi after all the soldiers and security personnel that had been deployed to the area were withdrawn.

As the terrorists entered the town with the girls they were hailed as heroes and received like freedom fighters by the locals and not as if they were terrorists.

The Boko Haram insurgents not only interacted with the crowd openly with smiles on their faces but they also spoke to the parents of the girls, apologised to them about what happened and told them not to allow their children to go to school again.

Apart from the fact that they made vast sums of money in their deal with Buhari it is clear that this whole thing is the gratest public relations stunt for Boko Haram ever since it began its operations 7 years ago and they have won many friends and admirers as a consequence of it.

The narrative that they would not have abducted the girls had they known they were Muslims, though false, seems to have resonated very with well with the local Muslim population in the north and this can only help Boko Haram and swell its ranks.

Someone is giving them very good advice and counsel and I suspect that that person or group of persons are in government and are also in one or more of our intelligence and security agencies.

They are working with Boko Haram in the same way as the dreaded Pakistani intelligence agency, known as the Inter Services Intelligence (ISI), works covertly and in collaboration and collusion with the Taliban.

Whichever way you look at it and whatever you believe, there can be little doubt that a terrible precedent has now been set and we can expect many more Boko Haram abductions in the next few months after which money will change hands again and the girls, as long as they are Muslims, will be released and returned.

This is especially so because the 2019 elections are approaching and the government needs to raise funds to build up its war chest.

Meanwhile, due to the massive amount of cash that they are receiving from these exercises, the numbers and strength of Boko Haram itself will increase enormously over the next few months until they become one of the most effective and wealthy terrorist armies and organisations in the world.

The Nigerian people and and indeed the people of the West African sub region do not know it yet but the truth is that we are all in trouble.

What Buhari and his friends have foisted on us is something that few can comprehend and imagine and the truth is that we simply cannot handle it.

Add that to the scourge of the Fulani herdsmen that has blighted the country and afflicted our people and you will accept that unless something gives and changes very quickly the future of our country is bleak.

A terrible precedent has been set and we shall rue the day that this was done. The government believes that it will boost its ratings and increase its popularity by these shameless manouverings and subtefuge but as the truth begins to unfold, and be rest assured that it eventually will, the whole exercise will backfire badly.

The truth is that the Dapchi incident is the biggest scam and money-making venture in the history of Nigerian politics and those poor girls are just pawns in a much bigger game and wider picture.

The fact of the matter is that Buhari is the owner of both Boko Haram and the Fulani herdsmen. He trades in blood, death and terror.

And if you really believe that a President that is capable of pulling off the Dapchi scam with Boko Haram will allow a free and fair election next year then you need to have your head examined.

This is a lawless and dangerous country where
anything can happen and anything is possible because the machinery of government has been highjacked by the emissaries of hell and the Kingdom of Darkness.

The Guardian Newspaper reported that,
“Boko Haram shook hands with the parents and apologised for abducting them.They said if they knew they were Muslim girls, they wouldn’t have abducted them”.

Can you imagine the implications of that?

I have been reliably informed that 15 year old Miss Liya Sharibu, the only Christian among the Dapchi girls, has not been released simply because she refused to renounce her faith and convert to Islam whilst in captivity.

Buhari told his Boko Haram friends to return the Dapchi girls yet Liya Sharibu, the only Christian amongst them, was not released because of her faith.

They decided to keep her in captivity.

I pray for her and her family. May God console them, give them strength and avenge them. If she is still alive I pray that God touches their hearts and that they release her.

I call on the Christian God, the Lord of the Universe, the Ancient of Days, the Lord of Hosts, the Great Avenger and the God of all Flesh, to avenge us and remove these cow lovers and sons of the bonded woman from the seat and corridors of power.

I pray that the Lord delivers us and wipes away our tears and collective shame.

Permit me to conclude this contribution with the words of Mr. Nata Sharibu, who is Liya’s father. He said the following to the Cable:

“All of them were released. They said some were dead there and my daughter is alive but they cannot release her because she is a Christian. They gave her the option of converting in order to be released but she said she will never become a Muslim. I am very sad but I am also jubilating too because my daughter did not denounce her faith”.

This is a courageous man and a great soldier of Christ. May the Lord return his daughter, gladden his heart and grant him peace and joy. God be with Liya. God be with us all."
Posted by Unknown
Labels: News