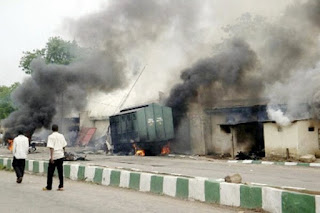 The explosion were believed to have been set off by suicide bombers.

Sources hinted that the first explosion went off around 9 pm.

As of the time of this report, details about the explosion are still sketchy.

However, the attack was reportedly carried out by at least four suicide bombers who infiltrated the area.

The military is currently combing the area to restore order.