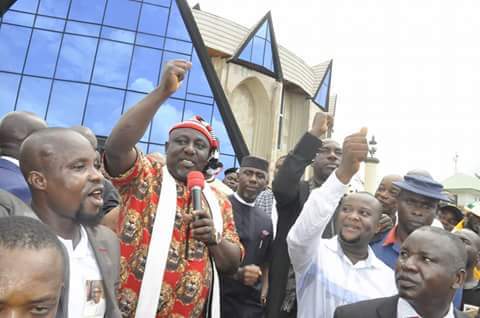 Imo State Governor, Rochas Okorocha has been described as a bad example of what a leader should not be. In a rejoinder press conference made available to Ifeanyicy.com by Dr Ethelbert Okere , the Chief Press Secretary to Senator Ifeanyi Godwin Araraume, the APC chieftain stated that its quite clear that Chief Okorocha, who has become almost a pariah as far as the Imo APC is concerned, is now running from pillar to post.


The Press release captioned "RE: WITH  DUE RESPECT, SENATOR IFEANYI ARARAUME LIED. HE IS NOT ONE OF THE FOUNDERS OF APC AND HAS NEVER BEEN A GOOD PARTY MAN , reads

" The attention of Senator Ifeanyi Araraume’s media office has been drawn to a press statement by the Imo state governor, His Excellency, Chief Rochas Okorocha, through his chief press secretary, Mr. Sam Onwuemeodo, on the above subject from which he, however, went ahead to pass several other scathing remarks on the senator. Overall, our take on the governor’s statement is that it confirmed our earlier fears that Governor Okorocha was the one who planted recent stories in the media to the effect that Senator Araraume wants to leave the All Progressives Congress (APC).

Governor Okorocha’s current antics is a clear indication that he sees Senator Araraume as the main stumbling block to his blind ambition to pocket the Imo APC and install a puppet as the next governor of the state and in a final bid to cover his tracks after leaving office. We recall that the senator, in answer to questions by reporters at the Nnamdi Azikwe International Airport, Abuja recently, had refuted the lie over his speculated exit from the party and went ahead to acknowledge that the rumour was the handiwork of those who are afraid and worried that they have lost control of the APC in Imo state. Evidently, those rebuttals angered Governor Okorocha and rather than face realities, he has gone further with his campaign of calumny against the senator. Hence, his latest press statement.

But even the least discerning observer of events in the Imo APC knows that the governor’s latest antics is in desperate pursuit of a remedy to his loss of relevance in the party as clearly illustrated by  recent developments. Only a few weeks ago, the party held the first ever State Executive Committee/stakeholders meeting in the state devoid of any inputs from the governor, the so-called leader of the party in the state. It is common knowledge that Governor Okorocha did everything to sabotage the meeting once the State Working Committee (SWC) refused to bow to pressure from him to have the meeting held at the government house. That refusal by the SWC, headed by Chief Hilary Ekeh, angered Governor Okorocha who not only avoided the meeting but rather allegedly sent thugs to disrupt it. But that plan failed and the stakeholders went ahead to hold the meeting at which crucial decisions were taken and even went further to raise funds to the tune of over N50 million, the first of its kind since the coming into being of the APC in the state.

Needless to say, the main significance of the huge success recorded by that meeting is that Governor Okorocha has lost grip of the party which he hitherto ran as a private company; just as he does for the entire state. This is where His Excellency, Chief Rochas Okorocha, is now. . Add to this the fact that the governor had only a few weeks before that crucial meeting, embarked on the misadventure of having all elected officials of the party sacked but which backfired, and it will become quite clear why Chief Okorocha, who has become almost a pariah as far as the Imo APC is concerned, is now running from pillar to post. Hence, his current diatribe on Senator Araraume who he believes is his nemesis

Senator Araraume is, of course, right in claiming that he is a founding member of the APC. The discussions for merger started in 2011 when he was a caucus member of the Action Congress of Nigeria, ACN, and part of the merger talks. The discussions went very far between the Congress for Progressive Change, CPC, the ACN, the All Nigeria Peoples Party, ANPP and others. However, the merger could not be consummated then, due to the closeness of the 2011 presidential elections.

Governor Okorocha was still in the All Progressives Grand Alliance (APGA). Even with his clout as a governor and claim as a political leader in the Southeast, he could not bring APGA to be part of the legacy parties of the APC. He only joined as an individual much later.

Now, the question is, who, between the two was a foundation member of the APC? In his press statement under reference, the governor claimed that Senator Araraume “has never been a good party man”. This statement is a good example of the pot calling the kettle black. Governor Okorocha should first examine his own trajectory since the beginning of the current dispensation. He started with the Democratic Party of Nigeria (DPN), then to the Peoples Democratic Party (PDP). After the PDP governorship primaries in 1998 in which he lost, the party compensated him with the senatorial ticket for Orlu zone. But he was roundly defeated by Chief Arthur Nzeribe of the then All Peoples Party, APP; while Chief Araraume won handsomely in Okigwe zone and Chief Evan Enwerem in Owerri zone.

Shortly after the 1999 general election, Chief Okorocha formed the Action Alliance (AA) party but abandoned it for the All Nigeria Peoples Party (ANPP) where he was allegedly sponsored to reduce the chances of the party by joining its presidential race which he also lost. He later returned to the PDP and was settled with the position of an Adviser to the president. The outcome of that appointment is in the public domain. Upon getting sacked from that job, he again returned to AA for a short while before again going back to the PDP where he ran for the office of the national chairman in September 2007 and failed woefully. In 2011, he berthed in APGA. Now he is in APC. In 2015 he was again in his usual routine of a “game spoiler” as he was allegedly sponsored to torpedo the chances of Gen. Muhammadu Buhari at the APC presidential primaries. Reports have it that Governor Okorocha is one of the five governors that have secretly joined he Social Democratic Party, SDP and only waiting for an auspicious time to unveil himself. We then ask, can Chief Ethelbert Anayo Okorocha beat his chest and pride himself as a “GOOD PARTY MAN”?

Even so, Okorocha always left behind a trail of woes in each party he berthed in. Let’s take the newest examples. He destroyed the Imo state chapter of APGA after it had given him a governorship ticket on a platter of gold and helped him win the 2011 governorship election. But how did Okorocha reward the party? He criminalized all the people he met in the party. A good example is that of his erstwhile deputy, Chief Jude Agbaso. Of course, the story is too well known to be repeated here. Eventually, he left the party battered and shattered. Today, he is at it again with the APC. Nearly all the politicians of note in the state who came into APC with him have left for other parties.

We ask, what is Governor Okorocha’s relationship with the following personalities who assisted him to his present position today: Prof Anthony Anwuka, Prof Ukachukwu Awuzie, Senators Osita Izunaso and Benjamin Uwajumogu, Chief PC Onuoha, Hon Uche Onyeagocha, Hon Mathew Omegara, Chief Best Mbanaso, Chief TOE Ekechi, Chief Ejike Uche, Chief Esiobu, Barr Iheukwumere Alaribe etc. They have all seen him for who he is and abandoned him. The most pathetic is the case of Prince Eze Madumere, who served him for over 20 years without blemish and later went to jail so that Okorocha could become governor. What is his relationship with Madumere today? The only fellow with Governor Okorocha today as a political ally is his son-in-law, Mr. Uche Nwosu, whom he wants to foist on the state as his successor.

SENATOR ARARAUME AND HIS DEMOCRATIC BATTLES

Governor Okorocha is fond of alluding to the various instances in the past when Senator Araraume stood his grounds to fight for the enthronement of internal democracy in the parties. It is a well-known fact that in all the cases, he came out triumphant. A case in point is that of the PDP in 2006/2007 when the apex court in the land, the Supreme Court, affirmed that he was the authentic governorship candidate of the party. That the election went the way it did is a different matter. Today, the case is a Locus Classicus.

He almost repeated that feat in 2015 but for the fact that the matter became time barred. Even so, Chief Okorocha became the beneficiary of that insistence by Senator Araraume that there must be fair play in party politics. Even a school boy in Imo state knows that had the Senator not decided to fight what happened at the PDP 2014 primary election, Chief Okorocha would not have been re-elected for a second term. There have been only three instances where Senator Araraume had to leave his party. The first was in 1999 when he left the then APP as state chairman to contest for the Okigwe zone senatorial seat under the PDP. And which he won. The second was in 2008 when the national leadership of the PDP dissolved the elected state executives of the party, whose tenure was yet to expire, and handed it over to the then governor, Ikedi Ohakim, following his return to the party.

The third was in 2015 when he won the PDP primary election which was fraudulently manipulated in favor of another aspirant. After several meetings with the leaders of the party including President Goodluck Jonathan, Chief Tony Anenih and the national chairman, Ahmed Muazu, there were so much foot-dragging until the matter became time barred. As such, the Senator rightly felt cheated and betrayed his own party.

The final point to note is that it is becoming too late in the day for Governor Okorocha. The APC in Imo has left him behind. However, the train can be momentarily halted to let him in if he is ready to cultivate team spirit and eschew greed and insatiable appetite for grabbing. As noted earlier, the APC faithful made a bold statement on Sunday, March 18, 2018; which is that they have taken back their party from him. It is not about Ifeanyi Araraume or Rochas Okorocha. It is about repositioning the party for the great task ahead."