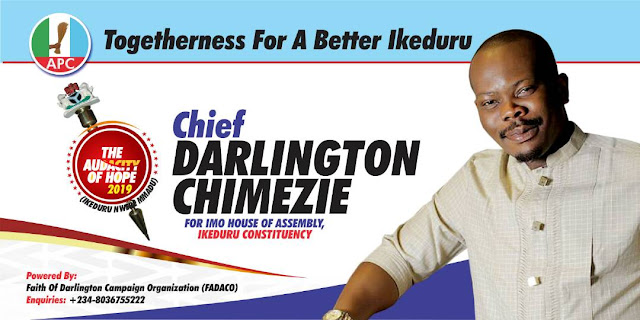 Youthful, energetic, pragmatic and result oriented philanthropist and Chief executive officer of Casa Mimosa Hotel and Suites, Owerri, Chief Darlington Chimezie has been described as the best thing to has happened to the people of Ikeduru local government area due to his humanitarian and social welfare services to his people, especially the poor and downtrodden in the society.

The funder, and President of Faith of Darlington Foundation who has earlier declared his interest to serve his people of Ikeduru state Constituency as a member of the House of Assembly under the All Progressive Congress, APC, may likely pick the party's ticket on a consensus ground owing to his track record, mass appeal, community development, and humanitarian activities.