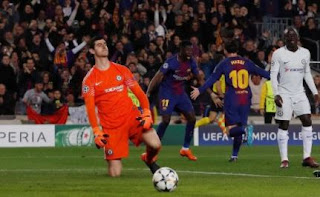 Chelsea goalkeeper, Thibaut Courtois admits he made a mistake for Lionel Messi’s two goals following Chelsea’s defeat to Barcelona in the Champions League.

Antonio Conte’s side are out of Europe after a 3-0 loss at Camp Nou which began with Messi opening the scoring in the third minute.

Ousmane Dembele doubled Barca’s lead before Messi completed the victory in the second half. For both of Messi’s goals, the Argentine put the ball through Courtois’ legs, and the Belgian admits the Barcelona forward exploited his weakness from close range.

‘I don’t think we deserved to be out but obviously individual mistakes cost us in both legs,’ he told BT Sport.

‘With the first goal I didn’t expect Messi to shoot from there, I was too late to close my legs, so a mistake on my part.

‘So, not nice to start the evening like that, and then two other missed passes and we paid for it.

‘They scored off our mistakes, I think apart from that we played well, defended well, hit the crossbar twice today, think that’s a bit unlucky but mostly our individual mistakes cost us.

‘We have to be honest about that. We have to continue working and try to win on Sunday as it’s the only silverware we may get this season.

‘I’ve played against him [Messi] a lot of times, conceded goals through my legs with him, for a goalkeeper like me from two metres that’s probably the weakest point through your legs because if I’m standing in a normal position there’s a lot of space in between.

‘It’s annoying, but I don’t think I have to hide, I have to come out, be a man, and say I made a mistake and move on.

‘It’s unlucky to go our with four goals from four mistakes. We have to move on, work hard and continue.’
Posted by Unknown
Labels: Sports