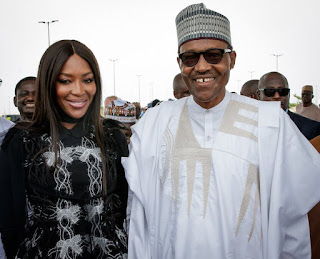 The Thursday morning assessment was part of Mr. Buhari’s visit to Lagos for the 66th birthday events of Bola Tinubu.

The State House was the first to post Mr Buhari’s rendezvous with Ms Campbell on its twitter handle.

Two hours later, the model, known for her controversial involvements with African rich men, returned the recognition with a tweet, although she described it as a “private launch.”

While Ms. Campbell, 47, is still based in the UK, she’s known to have been involved with rich men from Africa.

In 1997, she met with Charles Taylor, a former Liberian warlord currently serving a long sentence for war crimes and crimes against humanity, at a parry organised by former South African President Nelson Mandela.

When she testified at the trial of Mr. Taylor, Ms Campbell acknowledged receiving “small, dirty-looking stones” from the former Liberian president’s staff.

The testimony earned her a worldwide ridicule.

In recent years, Ms. Campbell has been rumoured to be dating Kola Aluko, a Nigerian oil dealer currently on the run for alleged fraud.
Posted by Unknown
Labels: News