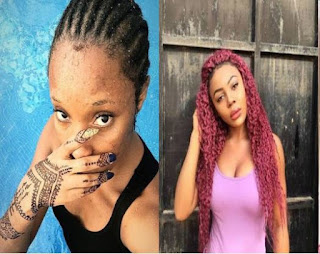 Speaking during her diary session with Biggie, Ennada who escaped eviction described Bambam as the dirtiest housemate in terms of thoughts.

Recall that Bambam has been in the news lately for the wrong reasons. The self-acclaimed 'Born-again' Christian and church worker was caught on camera having s*x with fellow housemate, Teddy A in the toilet.

Following the s*xual act, a lady who claimed to be a family friend of Bambam, identified as Fisayo Awonuga alleged that parent’s of the housemate are angry with her for having s*x with Teddy A in the toilet.
Posted by Unknown
Labels: Celebrity gist