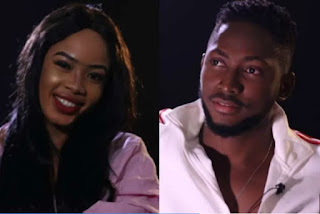 Big Brother Naija 2018 housemate, Nina, has revealed that Miracle is one of her priorities in the house.

Nina said she had already won Miracle and what is now left is the N45m star price.

“Miracle is my priority as well as the money,” she said during the Sunday live show hosted by Ebuka on Sunday.

Miracle, while responding said, “Yea, I and Nina are a ‘thing’… Nina is also my priority and N45m is second priority".

During the live show, Cee-C, Tobi, Anto, Miracle, Tobi Alex were saved from this week’s eviction while Ifu Enada and Leo were evicted.