Araraume Is A Bad Loser And Not A Good Party Man, Says Gov. Okorocha 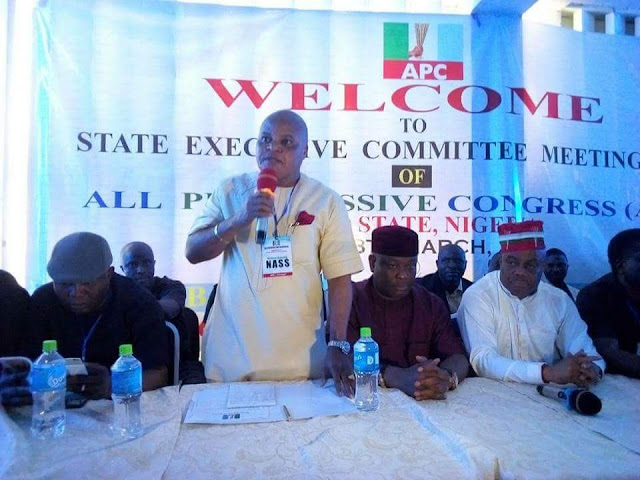 The Governor of Imo State, Owelle Rochas Okorocha has stated that senator Ifeanyi Godwin Araraume is not a good party man, and has lost trust and confidence of Imo people.

In a press statement made available to Ifeanyicy.com by the Chief Press Secretary to the Governor, Sam Onwuemeodo, captioned
"WITH DUE RESPECT, SENATOR IFEANYI ARARAUME LIED: HE IS NOT ONE OF THE FOUNDERS OF APC & HAS NEVER BEEN A GOOD PARTY MAN

- HE ALSO DESERTED APP, PDP, ACN, AND WILL ALSO DESERT APC" the government reiterated as follows:

"We have been following indiscriminate Media Statements and Press releases Credited to Senator Ifeanyi Araraume and the attendant false claims over his entry into the All Progressives Congress, APC.

In his latest media engagement, he was quoted to have claimed that he was one of the Founders of APC and to justify the falsehood, he tried much to talk down on Governor Rochas Okorocha.

It is unfortunate that a former Senator of Chief Araraume’s caliber should be telling cheep lies over an issue that is well known to all Nigerians who had followed events in APC right from the outset.

In 2015, he Contested the PDP Primary and Chief Emeke Ihedioha won. And he was in Court with Ihedioha until the election was conducted. He only began to relate with APC during the Supplementary election for the governorship.

So, if Senator Araraume Contested the PDP governorship Primary in 2015, could he have in the circumstance also be one of the founders of APC? The answer is obviously in the negative.

What we do not do is to allow opponents of the government to benefit from their lies. We shall continue to submerge their lies.

In case we have forgotten, Senator Araraume was the Pioneer State Chairman of APP. But before the 1999 election, he abandoned the Party following a development that will be a story for another day. The late Evan Enwerem took him to Chief I.D. Nwoga and late Emeka Echeruo who were leaders of the PDP in the State then and secured ticket for him for Okigwe Senatorial zone and that was how he went to the Senate.

In PDP in 2007, he fought the sitting governor then, Achike Udenwa to standstill. Took away the Party structure from Udenwa and emerged the governorship candidate of the PDP. Chief Udenwa decided to tell him that he was a sitting governor and then supported Chief Ikedi Ohakim of PPA, and he won.

He also fought Chief Ohakim from the same Okigwe zone with him upto the Supreme Court and lost. And in 2011, he left the PDP and became the governorship Candidate of the ACN. In the governorship election proper he came fourth and could not win any of the 27 LGAs in the State.

By the way, where would Senator Araraume get the votes to win governorship election in the State. Is it Owerri Zone whose people still feel that he is one of the major problems of PDP and Ihedioha or Okigwe Zone where the people of the area still believe that he was the cause of Ohakim’s failed second term bid or Orlu Zone people who see him as the person who never allowed their son, Achike Udenwa to have a peaceful handover.

Beyond the false claims in the media, let one sit down to imagine the fate of APC in the South-East or in Imo, without Rochas Okorocha.

If Senator Araraume has what it takes to win an election let him do what Rochas did in 2011 by picking the ticket of APGA that was not on ground and won and in 2015 when he defiled all odds and joined the Merger that gave birth to APC and also won.

He was one of those who called Rochas Alhaji in Government House and Okoro Hausa. The truth is that he won’t be allowed to do to APC what he did to APP, PDP and ACN."