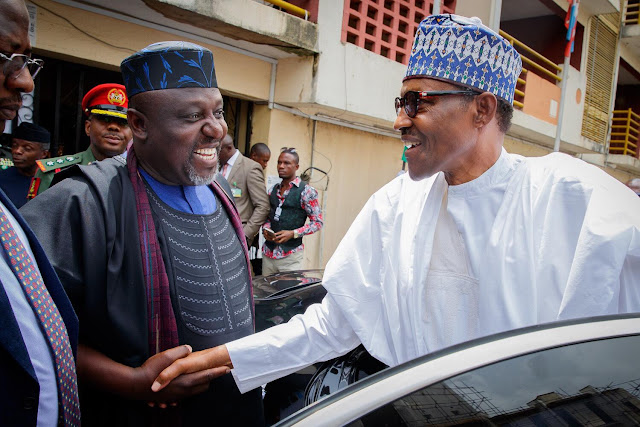 Following President Muhammadu Buhari’s pronouncement on the tenure elongation of the elected national officials of the All Progressives Congress, APC, as illegal, at the National Executive Committee (NEC) meeting of the Party on Tuesday, March 27, 2018, the Imo State Governor and Chairman of Progressive Governors Forum, Owelle Rochas Okorocha, says the President has simply scored another beautiful goal for the nation’s democracy and also added fibre to the letters of the nation’s Constitution and that of the Party.

According to the press statement made available to Ifeanyicy.com by the Chief Press Secretary to the Governor of Imo State, Sam Onwuemeodo, the governor said, "what the President said about the need to protect and respect the provisions of the nation’s Constitution and that of the Party could not be seen as a Victory or defeat for any member of the Party, but could only be seen as another bold step towards deepening democratic ethos or practices in our dear nation."

Speaking further, the governor commended the President for showing astute leadership in the Party when it is most needed.

Governor Rochas Okorocha also commended Chief John Oyegun-led EXCO of the Party for leading the Party from nothing to something great and noted that the Political history of the nation will be fair to them when it will be written.

The governor stated that the APC must continue to show good examples to other Political Parties by demonstrating due regard to the provisions of the nation’s Constitution and that of the Party."