Why We Can't Deliver On Our Promises - VP Yemi Osinbajo 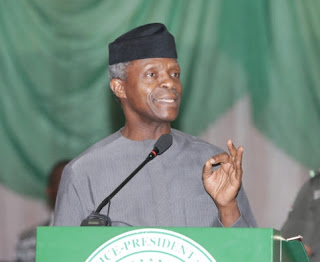 While speaking at a public lecture organised by The Kukah Centre in Abuja yesterday, with the theme: “How to make Democracy Work for Africa,” Vice President, Prof. Yemi Osinbajo, blamed government’s inability to deliver on its promises on socio-political inequality, weak justice system, absence of rule of law and lack of state capacity to maintain law and order.

According to a report by Vanguard, Osinbajo also expressed frustrations at the inability of anti-graft agencies to secure convictions for the many suspects brought before the courts for corruption due to the manipulative tendencies of the elite class.

Osinbajo spoke as Bishop of the Catholic Diocese of Sokoto, Fr. Bishop Mathew Hassan Kukah, said the problems plaguing the nation’s democracy will not disappear with the removal of President Muhammadu Buhari from office.

The vice president who noted that people expected those charged with governance to deliver on their promises, including delivering social goods, ensuring that the growing youth population got jobs, ensuring the rule of law and security, lamented that despite several suspects charged with corruption by anti-graft agencies in the country, convictions are yet to be secured.

He said that convictions have not been achieved due to the manipulation of suspects who are mainly elites, adding that people could be put on trial but the trials could go on forever because the system enables people to employ diverse legal tactics to delay conviction.

Accordingly, he said the elite preferred the status quo which set the lowest bar for political advancement, being “identity politics” of where one comes from or which religion one belongs.

He said the elite follow the path of such division to analyse real development issues, thus diminishing the real issues concerning the people such as good governance, job creation, poverty alleviation, peace and security.

The Vice President said: “That is the Africa story; democracy, yes; election yes. These are issues that remain very prominent everywhere in Africa.

“It is often threatened because we simply have not invested enough in the institutions that make this possible. So, ensuring security, problems of weak policing are some of the issues that we experience.

“The perception of people on the efficiency and fairness of the justice system is affected always by the slow pace of trials and manipulation of the system by those who can afford superior legal representation.

“Many of the ethnic and other parochial tensions that tended to create insecurity and outright conflict, time and time again, are largely on account of failure to deliberately undertake nation-building efforts.

“But the question of the capacity of the state to deliver on its most important role of security, justice and rule of law is often threatened because we have not invested enough in institutions that make it possible,” Osinbajo said.
Posted by Unknown
Labels: News