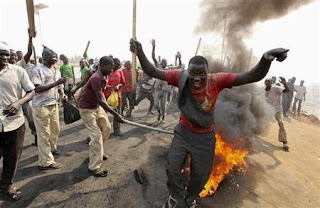 Villagers in Tudunwada local government area of Kano State have killed a suspected kidnapper who was reportedly part of a gang that mounted an illegal road block close to Falgore forest.

The villagers also arrested three other members the gang who were adorned in military uniform.

The incident, which occurred early Saturday also led to the recovery of one locally made pistol and cartridges.

It was learnt that the suspects have been handed over to the police.

The Kano Police Commissioner, Rabiu Yusuf confirmed the incident adding that investigations had commenced. He did not comment however on what the police is doing to curb jungle justice.

He noted that the suspects and recovered weapons have been taken to Doguwa Divisional Police office adding that these will be paraded soon to the public.