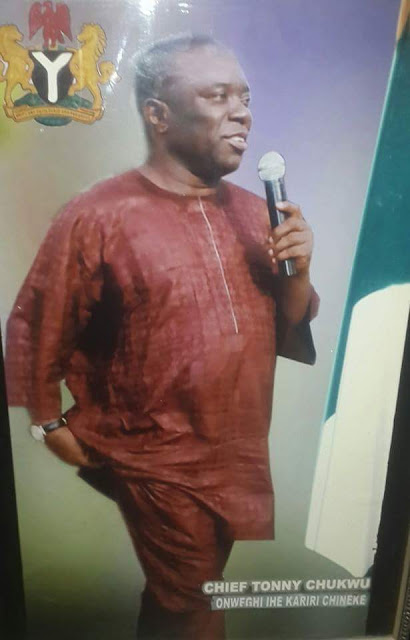 Chief Tony Chukwu, one of the prominent APC leaders in the South East has advised Imo citizens both at home and in the diaspora to use the great opportunity of this Lenten Season to ask God for direction regarding the 2019 Governorship election in the state. Arriving Owerri airport he informed journalists who wanted to know his position on the 2019 Imo Governorship election that he is seeking the face of God and asking God to give Imo State a Governor from His Throne of Grace.

Quoting Psalm 24 he said that the earth is the Lords and the fullness thereof meaning that everything on earth including all the systems of the world belong to God. He also emphasised the fact that according to the scriptures "all power belongs to God" The Papal Knight of St Gregory further emphasised the supremacy of God in the forth coming contest by quoting Exodus 33:19 where God said" I will have mercy on whom I will have mercy, I will have compassion on whom I will have compassion" and concluded that God has the sole prerogative to enthrone whomsoever he pleases. "It is now our duty as a people to use  this Lenten period to go down on our knees, seek the face of God and ask him to give us a Governor in 2019 that will do his will"

When asked if he has any candidate for Governorship in mind, he said that he is still praying about it but warned that anyone who thinks that he is not interested in who will emerge as the Governor of the state in 2019 or the Senator/House of Rep. member  that will represent him at the National Assembly is not being realistic.

He admonished Imo citizens to continue to live in peace and harmony, with the faith that God's decision on any matter is final. He advised  that politics should not be a do or die affair because after office life still continues. "We must learn to put our trust in the unfailing love of God, helping one another as brothers and sisters in the faith and belief that  the future is surely better" he concluded.
Posted by IfeanyiCy Njoku
Labels: News