Unbelievable: Woman Wakes Up To Find Huge Python Swallowing Up Her Dog (Photo) 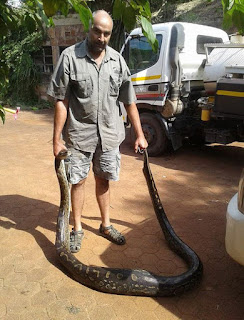 A woman was given the shock of her life recently after she woke up only to see her dog being swallowed up whole by a huge snake.

Nelia Scheepers is a woman who was recently horrified to and find a python had silently snatched her dog from her bed as she slept before it crushed and swallowed the pet whole in front of her.

According to Metro UK, Nelia Scheepers woke up to see 10-year-old Goofy ‘squeaking’ in agony while being suffocated by the 10ft snake.

It had coiled itself around the dog’s body in her remote farmhouse in Louis Trichardt, 300 miles north of Johannesburg, South Africa.

She managed to escape with her other dogs – but it was all too late for Goofy.

‘Goofy had very good hearing and would normally be the first to start barking at the sound of any trouble,’ she said.

‘She was sleeping on my bed and didn’t make a sound, so I think the snake must have moved so quietly through the house and then taken Goofy as she slept.

‘It was just so distressing to watch that snake coiling round and round, the poor dog was absolutely terrified and I could do nothing for her. It was to terrible.’ 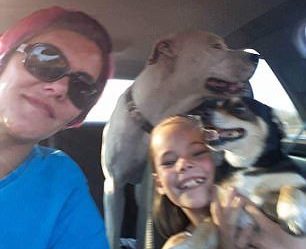 Mrs Scheepers, 60, later looked into the room to see the python had ‘unlocked its jaws and was swallowing Goofy whole’, she told MailOnline.

The outline of Goofy’s shape could still be clearly seen when snake catcher Frikkie Venter arrived at the home a number of hours later.

He said that it was extremely unusual for snakes to go into houses and get so close to humans, so it must have been very hungry. It is also currently summer in South Africa, with the high temperatures making it harder for snakes to find prey.

‘That snake won’t have to eat for another three weeks now,’ he said.

The grandmother said she had spotted the massive African rock python a few hours before her dog was taken but she had shut all her doors and windows, apart from a small window in her sitting room.

Mrs Scheepers was caring for the dog on behalf of her daughter Rentia, 34, who had given Goofy a home nine years ago after finding her dumped in the middle of a road.

The African rock python is the continent’s largest snake. It is nonvenomous and kills its prey by constriction, tightening its coils every time its victim breathes.
Posted by Unknown
Labels: News