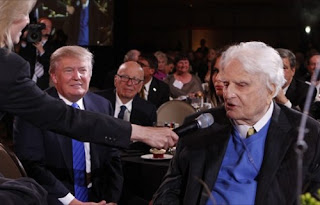 U.S. President Donald Trump is mourning Billy Graham as “a very special man,” after the famed preacher’s death at 99.

“The GREAT Billy Graham is dead. There was nobody like him! He will be missed by Christians and all religions,” Mr. Trump tweeted.

“We mourn his passing but I know with absolute certainty that today he heard those words, ‘well done, good and faithful servant,’” Mr. Pence tweeted.

Graham was nicknamed “God’s machine gun,” and he did not find it offensive at all.
On the contrary, the U.S. televangelist with a rapid-fire delivery and booming voice always wanted to be considered a fighter, a soul-catcher.

With his so-called “crusades” alone, the former Baptist pastor reached a worldwide audience of 215 million people in person, and countless found their faith through him.

In spite of his conservative positions on morals, he was considered for decades the “pope” of US protestants and was by far the leading mass evangelist of the 20th century.

When he bid farewell to his supporters in 2005, in a three-day mass show in New York with a cumulative audience of over 230,000 people, he said he was happy to be seeing God’s face soon.

Graham’s impact rests on a simple message delivered to the public for six decades: “Jesus loves you. Let him into your life and your sins will be forgiven.”

With brilliant rhetoric, simple words and clear examples from everyday life, he adapted this message for all walks of life.

He renounced racial segregation early on, saying there was basis for it in the bible, while railing against communism and what he saw as the widespread decline of values.

In post-war times, he supported the hunt for communists of the McCarthy era, and later the US waging of the Vietnam War. In the 1980s he increasingly gave up on addressing political issues and focused on what one critic called a “soft-focus” fundamentalism.

Graham was at the centre of a scandal in 2002, when a home recording of a dialogue between him and then US president Richard Nixon in 1972 was made public.

The preacher, one of the country’s great moral institutions, spoke of an alleged Jewish “stranglehold” of the media that had “got to be broken.”

Graham later apologised for these comments, which he said he did not remember having made.

The influential pastor was socially conservative but presented himself as non-partisan, serving as an advisor and confessor for other presidents besides Nixon, including Democrat Lyndon Johnson, and Republicans Gerald Ford and George H W Bush.

He was reported to have helped President George W Bush overcome alcohol abuse in the 1980s, through faith.

Born in 1918, the son of a humble Presbyterian North Carolina farmer, Graham was himself converted by a travelling evangelist when he was 16.

After being trained as a pastor, he launched his work in “awakening” and achieved notoriety with his first religious “crusades” in 1949: an event in Los Angeles, originally planned to last for three weeks, ran for over eight weeks because the marquee was packed full everyday.

He continued to rise from there, with the not-negligible help of conservative publishing tycoon William Randolph Hearst.

In 1950 he founded the Billy Graham Evangelistic Association, which his son Franklin now runs.

For over 50 years, his radio programme Hour of Decision was broadcast every Sunday by more than 700 radio stations around the world.

There were also television programmes, films, daily newspaper columns, more than 30 books, and above all evangelisation around the world, having held hundreds of “crusades” around the world.

He travelled to Germany five times, and kicked off in 1993 the massive ProChrist project broadcast by satellite to over a thousand points around Europe on nearly an annual basis since then.

“My one purpose in life is to help people find a personal relationship with God, which, I believe, comes through knowing Christ,” Graham once said.

His personal integrity helped him win over his supporters.

He lived with his wife Ruth for over 60 years until her death in 2007.

Time magazine put Graham in the list of the 100 most important personalities of the 20th century.

“If there is an indigenous American religion – and I think there is, quite distinct from European Protestantism – then Graham remains its prime emblem,” said powerful US cultural critic Harold Bloom.
Posted by Unknown
Labels: Foreign affairs