Sunday Oliseh Reacts After Being Suspended As Coach At Dutch Club 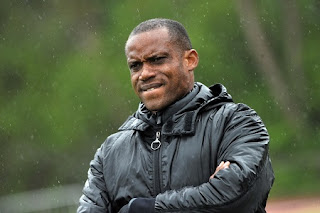 It will recalled that Mr Sunday Oliseh, a Tunisia ’94 Africa Cup of Nations winner was on Wednesday ‘suspended’ by struggling Dutch second division club Fortuna Sittard over “unacceptable actions”.

Oliseh, who was appointed by the Eerste Divisie side as their manager on December 27, 2016 came under pressure from the outfit’s hierarchy after the team slid down the table after suffering their fourth straight loss.

The former Ajax and Juventus midfielder, who became a cult hero at Fortuna Sittard Stadion after helping Sittard escape relegation last season, was reportedly sacked by the club last month, but the Dutch side denied the reports.

Fortunezen, who are desperate to gain an automatic promotion to the Dutch top-flight at the end of the season, also denied they were at loggerheads with the former Nigeria coach.

But the club announced on their official website on Wednesday that they had asked Oliseh to step aside.

Sittard also announced that they had appointed their youth team’s head coach Claudio Braga as the senior team’s caretaker manager “until the club has found a new trainer”.

“Several attempts by the club to encourage a change in the coach’s behaviour have unfortunately not worked, resulting in an unworkable situation,” the club said.

“The board of Fortuna Sittard emphasises that the decision to suspend Sunday Oliseh is not motivated by the current sporting performance.”

“The coach’s unacceptable actions have made cooperation between many people within the organisation impossible – from players to employees.

“Fortuna Sittard regrets the decision, but states that the club interest goes above all else.”

Oliseh left his job as the Super Eagles manager in February 2016 under a cloud of controversy.

He was alleged to have left after falling out with his players and some top officials of the Nigeria Football Federation.

However, Oliseh fired back on his Twitter account, claiming that the club decided to suspend him because he refused to play ball.

The Atlanta ’96 Olympic Games gold medallist wrote, “I confirm: due to my refusal to participate in illegal activities at Fortuna Sittard and violate the law, I have been suspended from my duties as coach by the foreign owners of Fortuna.

“Unfortunate for the lovely fans, my players and our hard-fought phenomenal positioning for promotion.” 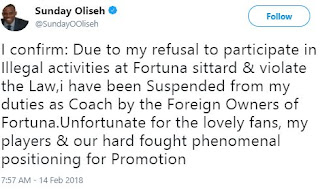