So Inspiring: Photo Of A Man Teaching Computer Inside A Small Village School Goes Viral 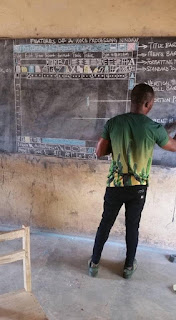 This is the photo that has caused quite some buzz on the internet.

The photo shows a man standing in front of a black board with the frame of a computer drawn on it. He is obviously inside of a classroom.

The man, who is a teacher in a small Ghanaian school, posted the photo himself and explained that this is the way he teaches his pupils computer.

According to him, even though there is a computer lab in the school, most times there is no electricity to power them on and so he resorts to making sure his classes are worth attending by drawing out the computers on the black board like that.

He wrote: "I taught computer classes at a primary school in a small farming village in Ghana a couple of years ago.

"We had to teach it exactly like this because even though the school I was at had a computer lab (which is uncommon) there was only electricity about 25 percent of the time there.

"It was interesting to see how on days that we did not have power we ended up teaching them more because the kids always got distracted on the computers."
Posted by Unknown
Labels: Gist