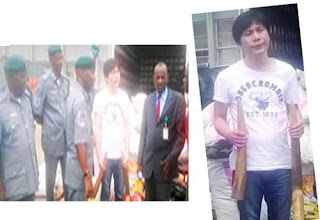 A Chinese man identified as Ko Sin Ying, has been apprehended by operatives of the Nigeria Customs Service, Federal Operations Unit, Zone A, with sacks of elephant tusks and pangolin shells with a combined duty paid value of N493.5m.

According to PUNCH Newspaper, while displaying the items at the FOU headquarters in Ikeja on Thursday, the Controller, NCS, FOU, Mohammed Garba, said the seizures comprised 55 sacks of pangolin shells weighing 2,001 kilogrammes and valued at N408.32m and 218 pieces of elephant tusks weighing 343kg and valued at N85.2m.

Garba said the items were removed from an apartment on Ogundana Street, off Allen Avenue, Ikeja, by the Warehouse Operations Team led by Assistant Comptroller Mutalib Sule.

He said further that the team, acting on intelligence received the previous day, had mounted surveillance on the area and on a tip-off, raided the apartment, where the gatekeeper confirmed the occupant to be a Chinese national.

Garba noted that the export of endangered species of animals like elephant and pangolin breached international protocols and conventions and that the Customs had increased responsibility for its implementation.

He said, “The United Nations charter on the preservation of endangered species entails that Customs administrations globally protect wildlife by intercepting illegal trade on such animals.

“It further prevents the killings of endangered species since the tusks are only available after the killing of the elephant or pangolin,” he said, adding that the items would be handed over to the Nigerian Environmental Standards and Regulatory Enforcement Agency for further investigations.

The suspect, Ying, who spoke through an interpreter, denied knowledge and ownership of the items. His lawyer, Francis Obaseki, said Customs men brought the items from another place to his client's residence on Ondo Close, Ikeja, and started questioning him about them.
Posted by Unknown
Labels: News